It’s an unprecedented time for individuals and businesses as lockdowns around the world have forced companies to scale back or shut down operations and temporarily lay off workers. Meanwhile, some companies are grappling with a surge in demand that was unthinkable just a few months ago.

BNN Bloomberg has compiled a list of announcements and statements from companies that are laying off, furloughing and hiring employees. Use the table below to view announcements by sector as well as various employment statistics – all of which will be updated daily.

JUMP TO A SECTION

“Based on our manufacturing production outlook, we would expect manufacturing employment to fall by around 70,000 this year, a four-per-cent decline. There will likely be significantly more than 70,000 layoffs this year, but most of the workers on temporary layoff will be recalled before the end of the year. Also, given the nature of this downturn (temporary health crisis), we would expect those 70,000 lost jobs this year to be recouped over 2021-22.” -- Canadian Manufacturers & Exporters in an April 1 email to BNN Bloomberg

“4,100 hotels have been closed, resulting in more than 250,000 job losses. Partial provincial breakdown: more than 68,000 employees laid off in British Columbia, 153,000 in Ontario and Quebec combined, and more than 29,000 in Alberta.” -- Hotel Association of Canada in an April 3 email to BNN Bloomberg

The International Air Transport Association (IATA) said flight demand is starting to recover from April lows. “Figures show that daily flight totals rose 30 per cent between the low point on 21 April and 27 May,” IATA said in a release. “While this uptick is not significant to the global dimension of the air transport industry, it does suggest that the industry has seen the bottom of the crisis, provided there is no recurrence. In addition, it is the very first signal of aviation beginning the likely long process of re-establishing connectivity."

On June 24, Fitch Ratings Inc. downgraded Canada’s credit rating one notch from AAA to AA+, with a stable outlook because of its ballooning federal deficit and growing provincial budget shortfalls stemming from COVID-19 relief spending

Canadian job postings are still on the path to recovery but remain down more than one-third from last year’s levels according to Indeed Canada. Below is the number of job postings on Indeed’s site from Feb. 14 to July 3, 2020, compared to levels during the same period last year. 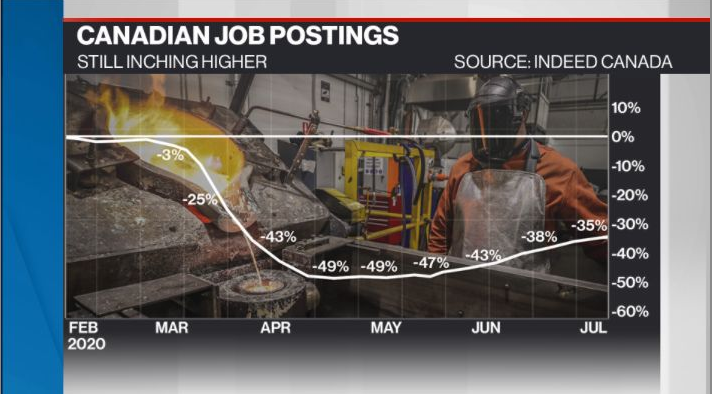 The number of new jobs posted on Indeed Canada’s website between February 14 and July 3, 2020 was down from totals posted during the same period last year. The chart below compares new postings on a year-over-year basis. 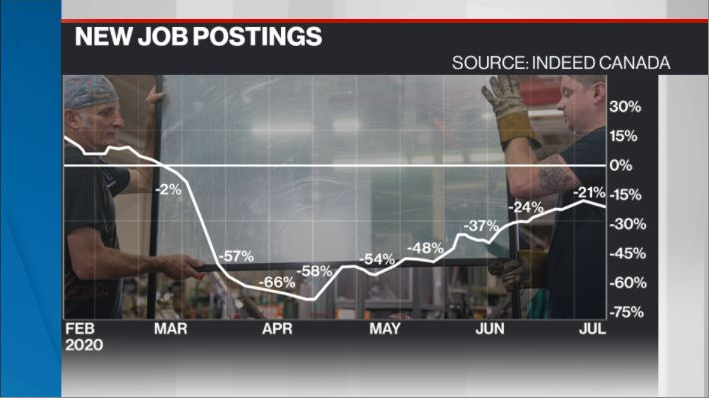 The pandemic eliminated a disproportionately greater number of lower-wage jobs in its first months, but Indeed Canada is seeing postings for such positions rebound faster than postings for higher-paid positions. The graph below shows the level of job posting activity by wage tier compared to the same time period last year. 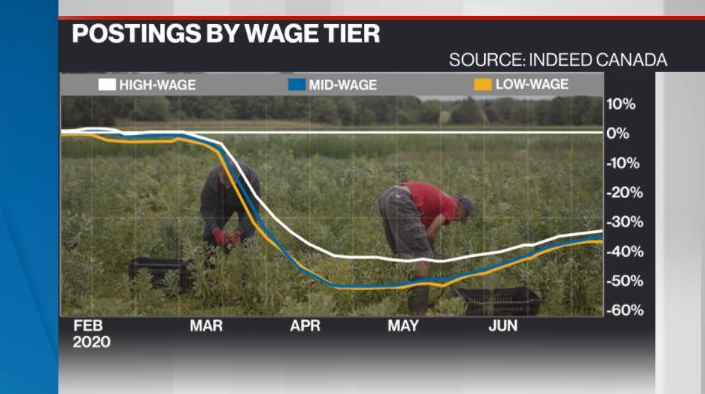