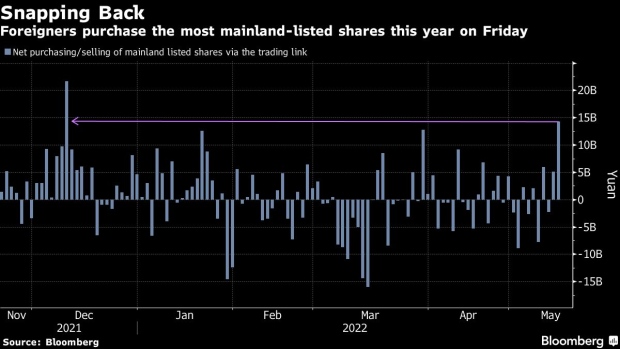 The Bund Bull statue in Shanghai, China, on Tuesday, Jan. 4, 2022. A wall of maturing debt and a surge in seasonal demand for cash will test China’s financial markets this month, putting pressure on the central bank to ensure sufficient liquidity. Photographer: Qilai Shen/Bloomberg , Bloomberg

(Bloomberg) -- A fund manager who made triple-digit gains by hedging risks in Chinese equities is now turning bullish on mainland shares.

Zhao Yuanyuan’s fund at the 500 million yuan ($75 million) Shenzhen Qianhai JianHong Times Asset Management Co. has returned 138% so far in this year’s tumbling market. Her bets on infrastructure, energy producers and Covid-19 drug makers helped bolster gains, while she had stayed neutral overall wary of renewed lockdowns in China and the war in Ukraine.

As local outbreaks stabilize, the 41-year-old veteran said she’s starting to place more bets on a recovery expected over the next two-to-three months. Her pivot underpins a bigger shift afoot among China stock investors, who say that the deep pessimism that had engulfed the market appears to have peaked. Promises of growth-lifting stimulus coupled with Shanghai easing its weekslong lockdown are helping turn that tide.

“Starting last week, we’ve been unwinding some of our short positions as there’s a clearer time line on Shanghai returning to normalcy of life and as US inflation expectations are edging lower,” Zhao said in an interview last week. “New China flare-ups and a change in Covid policy are some of the factors we are watching before turning more bullish.”

China’s CSI 300 Index has gained 1.5% this month, a rare major stock benchmark index in the world that is in the green for May. Year to date, however, it still lags the regional benchmark after slumping more than 17%.

Zhao oversees Yingfu No.4 fund, which ranked first among more than 20,000 private-fund peers on the mainland this year, according to fund tracker Shenzhen PaiPaiWang Investment & Management Co. It has remained in the top 10 best-performing funds over the past 12 months.

The fund has increased its net-long stock position to about 60% of its investments. Zhao says consumer discretionary shares, especially autos and suppliers, could benefit most during an upcoming relief rally. She is also keeping tabs on a proposal by the European Union to ban Russian oil to gauge inflation implications.

Adding to signs of a China stocks turning point are a pickup in leveraged trades and foreign inflows, with the latter surging to the most this year on Friday.

“We’ve come to a point where a recovery in earnings -- which have been affected by Covid -- and valuations are both working toward a turnaround in stocks,” said Zhao, adding that she will increase exposure in coming weeks if daily trucking traffic and northbound flows continue to signal a turn for the better.