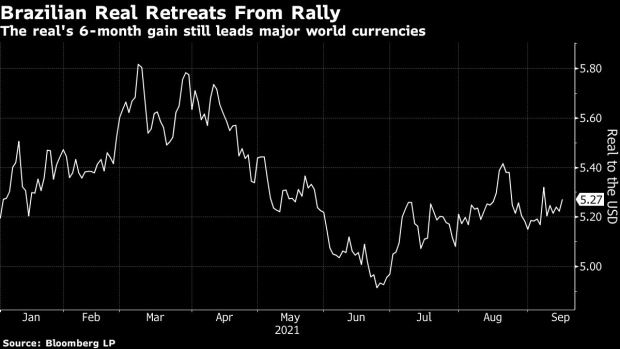 A person holds new 200 reais banknotes outside the Central Bank of Brazil in Brasilia, Brazil, on Wednesday, Sept. 2, 2020. Brazil released its largest banknote in an effort to meet cash demand driven by the coronavirus pandemic. Photographer: Andre Borges/Bloomberg , Bloomberg

(Bloomberg) -- Hedge funds are closing out winning bets on the Brazilian real after it surged more than any other major currency, bracing for headwinds as the nation faces slower economic growth and increasing political turmoil.

Kapitalo Investimentos, which oversees over 20 billion reais ($3.8 billion), said in a letter to clients that it unwound its long position in the currency, citing the conflict between President Jair Bolsonaro and the judiciary that’s adding to the country’s economic uncertainty. Data from Brazil’s exchange, B3, show that local funds’ derivative bets that the U.S. dollar will rise against the real have surged to $5.5 billion from nearly zero in early July.

The shift comes after the real has gained more than 7% against the dollar since March, making it by far the best performer in the world. That’s when the central bank became one of the first to start raising interest rates, ushering in a series of aggressive hikes to combat inflation.

Now, banks including JPMorgan Chase & Co. expect economic growth to drop below 1% next year. The country is also contending with political gridlock over the budget and facing what is almost certain to be a highly polarized and contentious presidential election in 2022.

Bank of America Corp., which surveyed 31 Latin American fund managers overseeing $77 billion, found that they were tempering expectations for Brazil as politics moves “to the front seat.” Only 29% expect the real to strengthen past 5.10 per U.S. dollar, down from 45% in August.

“The early electoral debate and fiscal risks prevent us from having significant positions on the real right now,” said Bruno Marques, a portfolio manager at XP Asset Management, which oversees about 122 billion reais. Marques said its XP Macro fund is currently neutral on the currency after holding long positions earlier this year.

Yet some aren’t convinced the rally has run its course. The combination of higher interest rates and a robust trade surplus should favor the Brazilian currency, said Fabricio Taschetto, chief investment officer at hedge fund manager Ace Capital.

Central bank chief Roberto Campos Neto’s signal this week that it may provide liquidity as banks unwind hedges at the end of the year is another positive for the real, said Gustavo Pessoa, a founding partner at Legacy Capital. The firm has a combined position of being short on the U.S. dollar against the Brazilian real while also betting on declines in the benchmark Ibovespa equity index.

The real’s gain since March is almost twice that posted by the Mexican peso, the next best performer among the world’s major currencies, according to data compiled by Bloomberg. But all of those gains came from early March to late June, when the real rallied some 16% against the dollar to as much as 4.91. It has since retreated to around 5.28 and has sometimes faced unusual levels of volatility.

“I don’t see the opportunity for great allocations in the real,” said Marques.