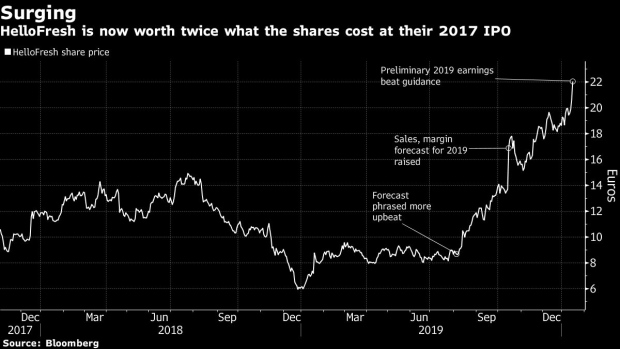 (Bloomberg) -- HelloFresh SE’s strong preliminary figures for 2019 help overcome the skepticism its business model has faced, yet the skyrocketing shares may have gone too far too fast, according to analysts.

There’s a good chance the company generated positive free cash flow last year, the “final proof of concept” for its meal-kit business, Bankhaus Lampe said. Even so, Morgan Stanley noted that much of the excitement is now priced in.

The German firm, which assembles ingredients into boxed meal kits that customers cook at home, jumped as much as 14% on Thursday, making an intraday record at 23.65 euros. A little more than a year ago, the stock had fallen below 6 euros.

While the current share price has overshot the target of even the most bullish of the eight analysts surveyed by Bloomberg, none of them recommend selling the stock, five rating it buy and three advising to hold. The company will publish its full annual report on March 3.

The stock has more than doubled since the initial public offering in 2017, making it one of Germany’s most successful listings above $50 million of the past five years.

Here is what analyst said following the earnings release:

--With assistance from Nate Lanxon, Kit Rees and Lisa Pham.

To contact the reporter on this story: Richard Weiss in Frankfurt at rweiss5@bloomberg.net

To contact the editors responsible for this story: Daniel Schaefer at dschaefer36@bloomberg.net, Kasper Viita, Paul Jarvis