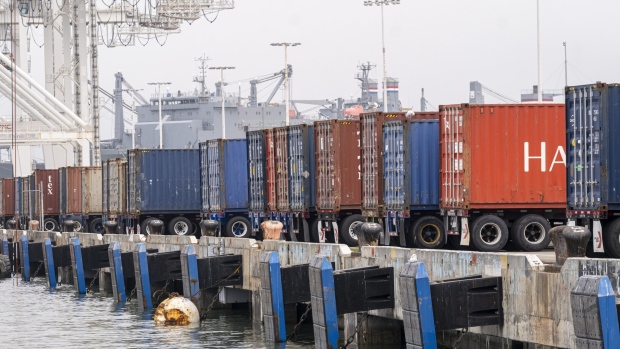 Global supply chains are creaking. Shortages of everything from raw materials to cars are nearing historic levels. Shipping rates have risen to multi-year highs, and consumers face delays and price increases that will stretch beyond the year-end holiday season. Much of the demand is in the U.S., where shoppers seem to have an endless appetite as the economy stages a comeback. Meanwhile, the supply is primarily in Asia, where many countries – chief among them China – still confront lockdowns and a rocky recovery out of the pandemic. That’s created tensions across global trade channels, manufacturing hubs and logistics networks. How companies and policy makers work through these challenges that are now weighing on growth will be critical. Bloomberg columnists Brooke Sutherland, Daniel Moss and David Fickling joined Tom Orlik of Bloomberg Economics to discuss where the pressure points are and factors at play, how industrial firms are responding, and for what consumers need to be prepared. Here are the edited highlights of their conversation, moderated by Bloomberg Opinion’s Anjani Trivedi.

Trivedi: All the demand is in the U.S., and much of the supply comes from Asia. What have you seen with shipping and logistics on the trade front?

Fickling: If you look at trade volumes, the trend growth in global trade volumes — which tends to go up at a fairly constant rate — basically stopped in 2018 with the Trump trade wars. Before the big macroeconomic disruption of COVID, there was this macroeconomic disruption of a sort of fairly unprecedented stock in trade volume growth. There’s yet another cycle, which is these very long cycles of overcapacity and under-capacity you see in the shipping container industry.

At this point, the world’s container shipping fleet is the oldest it’s been since 2008. So they’re really not kept up even without what’s happening with the rebound from COVID. With the shift away from services to goods in consumer spending, we still don’t really have a shipping fleet or a shipping infrastructure that’s fit for purpose. The slowdown of trading in the Trump trade wars to some extent covered that up. Now, we’re staring it in the face.

Trivedi: When we think about pricing power for U.S. industrials, what do we actually see in the numbers?

Sutherland: Generally profit margins were fine, and I think a lot of that did come down to pricing power. We’ve just seen really incredible pricing power out of these industrial companies. They’ve also gotten very creative in terms of rerouting goods to less clogged ports. One trend that’s just started in the last couple of weeks is we’ve seen a number of U.S. companies take steps to bring more of their supply chains in-house by vertically integrating. One that I thought was really interesting was American Eagle acquired two logistics companies outright, which is highly unusual for such a specialty retailer in the U.S., to be buying logistics companies. But they wanted more control over their operations to be able to offer affordable same-day, next-day delivery and compete with the likes of Amazon and Walmart, which obviously have much bigger logistics operations.

Trivedi: What happens from the supply side of things in China?

Orlik: What’s happening in China right now is really interesting. There's a couple of factors of work, which are contributing to growth slowdown in China, but also global supply strains. The first one is China’s zero-COVID strategy. There aren’t that many COVID cases in China, but even when there’s one or two in a city, that city gets locked down. Because China is the biggest source of supply for global manufactured goods, that can send ripples around the global economy. When you have energy shortages, it’s more difficult for industry to operate, which contributes to supply strains as well.

Moss: This supply chain story is as much of an issue in Asia as it is in Western Europe or the United States, with a couple of caveats. One, the prices of many things are largely controlled by government policy in important parts of Asia. If you’re a country like Singapore, although you’re big in logistics, you’re big in freight, you’re big in the port, you’re big in transit... In a lockdown period, those things aren't necessarily working for you. If we can’t get our stuff, what are we going to do? It opens up a whole array of existential issues — not just on the TVs, fridges and the home PCs, but on things as basic as food. There’s been a discussion here at the New Economic Forum on how do we ensure the vaccines supply chain — absolutely critical to everything — is kept a going concern?

Orlik: The big takeaway is that supply shortages are really at a historically elevated level. We haven’t seen this much strain on the supply chain in 10 years — in 20 years in some countries. The second takeaway, and this is really only a sort of a very tentative sign at this point, at least in the United States, our gauge is showing the supply chain stresses may have peaked. The peak came a couple of months ago. Supply streams are still historically elevated, but they’re not quite as high as they were coming into the end of the third quarter.

Trivedi: How does energy play a part in keeping supply chains running?

Fickling: All the ships plying the seas are all powered by fuel oil, but that’s surprisingly not the biggest factor in the cost of shipping. The place where it’s really important is in China itself. In terms of every major commodity — aluminum, copper, steel, all of those industrial qualities that are the very basis of these supply chains — China makes pretty much 50 per cent of all of them. They’re very energy-intensive. In fact, they’re so energy-intensive that the Chinese government has been having some pretty serious efforts to actually crack down on these industries. They want to reduce output and particularly reduce emissions because of their own goals.

Sutherland: Even as the U.S. has reopened and been more ahead of the curve versus some of the other parts of the world, you can get on an airplane today. You can go to a movie theater, and people are spending on those things. Bank of America publishes really interesting credit card data, and they showed that airline spending turned positive on a two-year basis for the first time this year in the past couple of weeks. Entertainment spending is up about 4 per cent relative to pre-pandemic levels, and yet we still see insane spending on goods. Furniture spending is still up almost 35 per cent on a two-year basis, home improvement store spending is up almost 50 per cent. It’s interesting that even as we’ve seen this reopening trend, the U.S. consumer is still very willing to spend on goods, and that’s contributing to some of the supply chain challenges that we’ve seen.

Trivedi: We’re starting to see corporate spending around solutions pick up. Are there other actionable solutions we need to be thinking about?

Orlik: What do we need in order to have more resilient supply chains? A lot of capital investment to diversify sources of supply and strengthen logistics. You need a huge amount of management bandwidth at the corporate level, leadership bandwidth at the government level to think through these problems, and boots on the ground to start making things happen on projects.

Trivedi: Should we be ordering holiday gifts right now?

Sutherland: If there’s one item that you really want or your kids really want, you should definitely order it sooner rather than later. Some of this is definitely in the retailer’s interest to push you to buy very quickly. It helps them manage their supply chains. It helps them not offer you a ton of deals this holiday season. If there is one thing you really must have, you should’ve definitely bought it yesterday. But in general, you’ll probably be able to find your Christmas gifts.