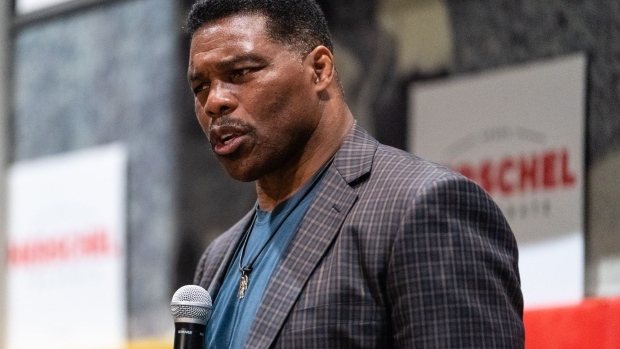 Herschel Walker, US Republican Senate candidate for Georgia, speaks during a campaign rally in Macon, Georgia, US, on Wednesday, May 18, 2022. Heisman Trophy-winner Walker is vying to face incumbent Democratic Senator Raphael Warnock in his first political run. , Bloomberg

(Bloomberg) -- Georgia’s second-highest ranking Republican says the GOP has only itself to blame for betting on Herschel Walker as a candidate to unseat Senator Raphael Warnock and potentially squandering a chance for the party to win control of the US Senate.

The Republican Party should never have put forth “an untested and unproven first-time candidate,” like Walker in a pivotal election, Lieutenant Governor Geoff Duncan wrote in a opinion column published by CNN, a public reflection of rising concern within Republican ranks.

Walker’s campaign has been thrown into turmoil five weeks before the Nov. 8 election, after a series of revelations about his personal and business affairs, most recently a report by the Daily Beast that Walker paid for an abortion in 2009, despite his stated opposition to the procedure. Amid the tumult, Walker’s political director, Taylor Crowe has been fired, CNN reported Friday, citing two people familiar with the matter.

Walker denies the Daily Beast report, which Bloomberg has not independently verified. He told reporters at an event Thursday he will “not back down” in the contest. “We’re going to win this race,” he said. His campaign didn’t immediately respond Friday to a request for comment.

The scrutiny the former University of Georgia and NFL football star’s personal past has been intensifying. There already had been allegations of past domestic abuse and exaggerations of his business prowess.

Polling shows Warnock with a slim lead over Walker. The only debate in the race is set for Oct. 14 in Savannah.

Former President Donald Trump, who encouraged Walker to enter the race, has stood by him. Make America Great Again Inc., the new super PAC started by Trump allies, has spent $753,000 on cable television commercials according to AdImpact, which tracks political advertising.

But although the ad purchases went forward, Trump associates expressed concerns and even disappointment in discussions with the Walker campaign, a person familiar with the matter said on Friday.

“If we want the American public to take us seriously, we need to take the first step by nominating candidates they should take seriously,” Duncan wrote in the CNN column.

The lieutenant governor, who was a critic of Trump’s unfounded claims of voting fraud in the 2020 election, isn’t seeking re-election.

He cited Warnock’s slight edge in the race and his near lockstep voting record to support Joe Biden’s legislative agenda, despite the president’s deep unpopularity in Georgia, until recently considered a Republican bastion.

“Yet instead of Warnock’s voting record, the attention has focused on the Republican challenger, a trend that will only accelerate after recent events,” he states. “Just as in the special elections in 2021, if the GOP squanders this year’s Georgia Senate race, we only have ourselves to blame.”

(Updates with Trump buying ads for Walker, in seventh paragraph.)