How long can retail day traders be right about the value of Hertz’s stock and institutions be wrong? We’re about to find out.

The latest round of drama for Hertz Global Holdings Inc. concerns its newly re-launched shares, which can be bought and sold by individuals on the open market for about US$17. But insiders who got their stakes as part of the auto rental company’s recent bankruptcy settlement can trade only with other professionals in private markets, at least for now. Those shares are fetching about US$5 less, according to investors with access to trading data.

The quirk is rooted in U.S. securities law, which lets shares skip the usual registration rules if they’re given to bondholders and other creditors to settle unpaid debts. This break, though, comes with a restriction: The unregistered shares can be held only by so-called qualified buyers, and thus can’t be dumped into the public market. In this case, that’s 97 per cent of Hertz’s stock.

The upshot is that nearly all of Hertz’s shares can be bought and sold only among professionals. Their price for the stock, which is less than a month old, has hovered around US$12, two people familiar with the private trading said. They requested anonymity because they aren’t authorized to talk about the matter.

“I don’t know that it’s unfair because this is what everyone signed up for,” said Phil Brendel, a senior credit analyst with Bloomberg Intelligence who specializes in dissecting settlements for distressed and bankrupt companies. 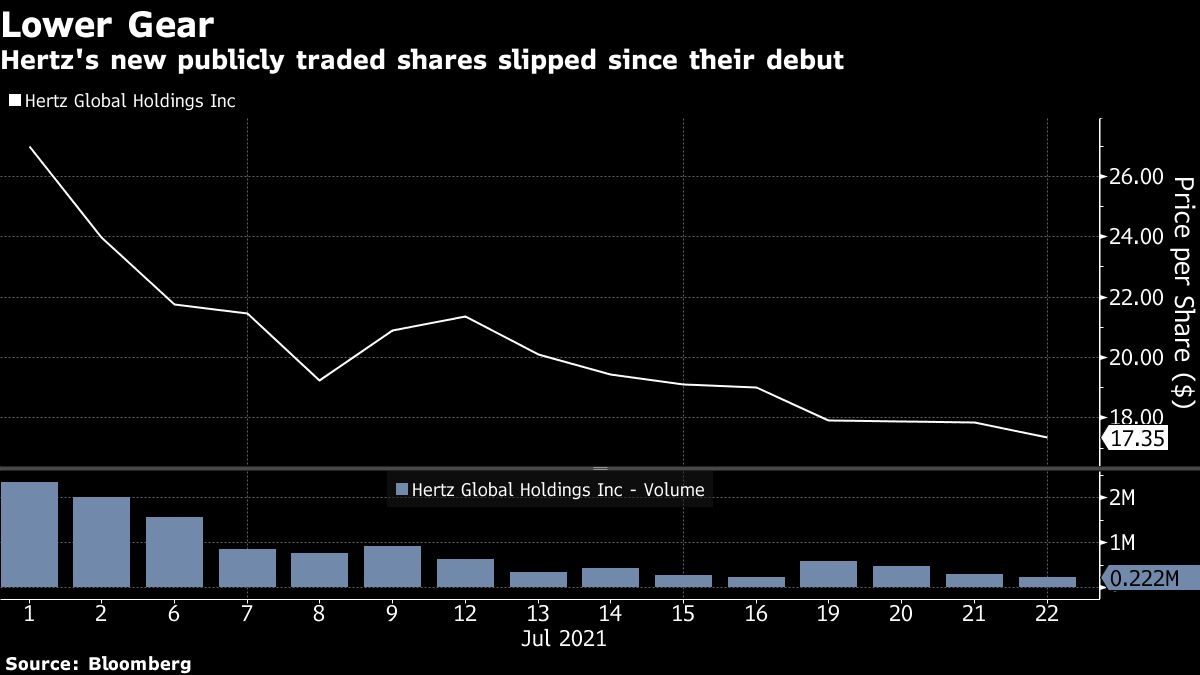 Once Hertz registers the privately traded shares, the price difference should vanish, Brendel said, and they’ll probably trade closer to US$12 than the current price of about US$17. The company has not said when it will register those shares, but one person with knowledge of the timing said Hertz is likely to file for approval in three to six months.

Hertz, based in Estero, Florida, didn’t have a comment on the anomaly. At either price, the stock is in far better shape than it was during the depths of the pandemic and bankruptcy, when the company told shareholders they would almost certainly be wiped out. The subsequent economic rebound and relentless support from meme-stock traders restored some of the value to the stock, creating a windfall for anyone who bought at the time and a new source of value to help settle Hertz’s debts.

Hertz’s exit from bankruptcy was carefully negotiated among different groups of creditors, including noteholders and other lenders owed billions of dollars, shareholders and an investment group lead by Knighthead Capital Management and Certares Management that ultimately won control of the company. The settlement included swapping the old shares for the new series of stock that’s now trading.

To get their shares, noteholders first were given cash for their debt. They then had the option of buying Hertz at US$10 and giving up their demand to be compensated for the early payoff of their bonds, or rejecting the shares and filing a claim for the fee.

Only about 14 million shares are held by the general public. Qualified investors hold more than 450 million, and their trading has been brisk, with far more shares changing hands than in the public market, the people said.

In a single trade earlier this week, a seller offered 250,000 shares at a bit more than US$12 each, according] to a document shared with Bloomberg News. That same day, only 292,000 shares were sold on the public market.

The price professionals are paying is much more rational than the public price, Brendel said. Hertz estimated that in 2023 the company would take in about $857 million in earnings before interest expense, taxes and amortization, or Ebitda, which is a common accounting measure of performance. At US$12 a share, Hertz would be valued at about US$8.6 billion, or 10 times the Ebitda estimate.