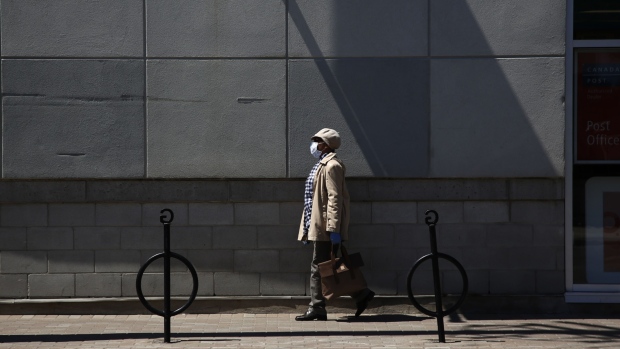 A pedestrian wearing a protective mask walks down Bank St. in Ottawa, Ontario, Canada, on Wednesday, May 20, 2020. Bloomberg/David Kawai

As Canada came to a near standstill during the month of April, the country’s gross domestic product fell 11.6 per cent according to Statistics Canada. While economists were expecting a decline of 13 per cent, the actual figure still represents the largest monthly drop on record. There are early indications, however, that there may be a rebound in the numbers for May, when businesses began to reopen.

Consumer insolvencies plunge by most on record in May

Insolvencies, which include bankruptcies and proposals, plunged 51 per cent in May compared to the same month in  2019 — the biggest year-over-year decline since 1988, according to the Office of the Superintendent of Bankruptcy Canada. The third straight month of declines suggests the federal government’s emergency aid programs are helping Canadian consumers stay afloat. Meanwhile, consumer debt loads dropped for the first time in a decade in March, with retail closures causing many Canadians to cut back on credit card use, according to Equifax Canada.

Tips on finding a rent solution with your landlord

Amid the COVID-19 crisis, many Canadians are facing the reality of life without an income or with a significant loss in funds. As a result, many renters are unable to afford a place to live. Tara Deschamps of The Canadian Press outlines tips from industry professionals on how to start the awkward conversation with your landlord on finding a financial solution for paying rent amid the pandemic.

Why Canadian investors should be globally diversified

Even after rallying the most since 2009 in the second quarter, Canada’s benchmark stock index is down nearly 10 per cent this year. The resource-heavy S&P/TSX Composite has been hit hard by the global economic freeze and the crash in crude oil prices, with energy-related stocks still at about half their value since the start of the year. With the pandemic far from over and amid uncertainty about where stocks are headed, Personal Finance Columnist Dale Jackson makes the case for building a properly diversified portfolio that ventures beyond Canada’s borders.

With more businesses starting to open up across the country, some Canadians are facing the dilemma of whether their return to work will put their health in jeopardy. Frida in Montreal says she's 67 years old and immunocompromised, however her employer told her if she doesn't return to work they'll say she voluntarily quit. Kevin Coon, partner at Baker McKenzie and a specialist in labour law, breaks down Frida's situation and outlines her rights in the workspace at this time.

"You want to be aware of Bill C-17. It has not yet received royal assent and what you want to know within that bill is that if you are offered a reasonable job offer and you reject it, you will be disqualified for CERB ... you want to be careful, you don’t want to have to pay it back later on." —Kelley Keehn, consumer advocate at FP Canada, on how a new federal bill would bring changes to aid programs if passed

Can my employer switch my job from part-time to full-time?

Kelley Keehn, consumer advocate at FP Canada, answers a viewer question on whether employers can force a worker to change their schedule from part-time to full-time during COVID-19.