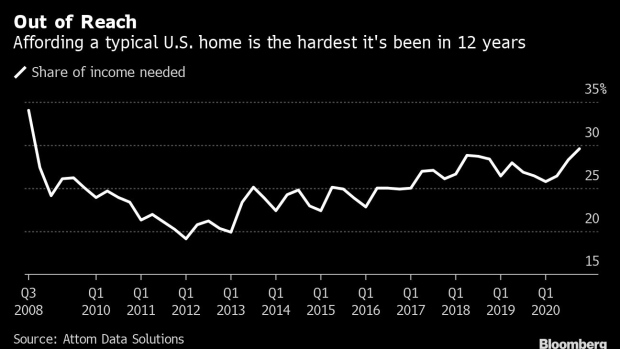 (Bloomberg) -- Record-low mortgage rates were supposed to make it easier for homebuyers. Instead, they’ve helped push affordability to a 12-year low.

Buyers in the fourth quarter needed to spend almost 30% of the average wage to afford a typical house, the biggest share for any three-month period since 2008, according to preliminary figures from Attom Data Solutions. Low borrowing costs, now below 3% for a 30-year loan, have spurred a buying frenzy, driving up prices across the country as shoppers compete for a shrinking supply of listings.

During the pandemic, prices have increased faster than earnings, leaping by double digits in 79% of the 499 counties included in the report. More than half of those counties are now less affordable than their historic averages, Attom said in a report Thursday.

“The future remains wholly uncertain and affordability could swing back into positive territory,” said Todd Teta, chief product officer at Attom. “But, for now, things are going in the wrong direction for buyers.”