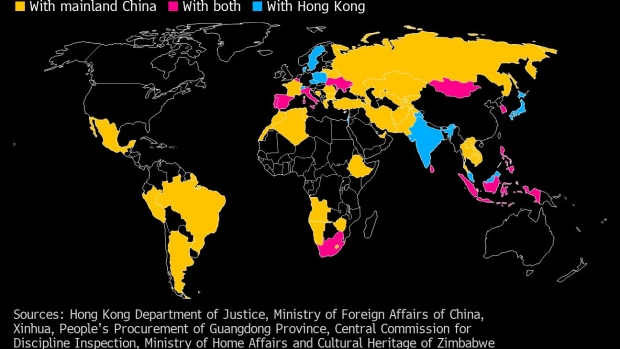 Members of the Disciplined Services march in front of a banner promoting the national security law during a flag-raising ceremony to mark the 23rd anniversary of Hong Kong's return to Chinese rule in Hong Kong on July 1, 2020. Photographer: Roy Liu/Bloomberg , Bloomberg

(Bloomberg) -- The U.K. government is alerting people in Britain who were named in a Hong Kong national security case to avoid traveling to countries that have extradition treaties with the Chinese territory.

The U.K. Foreign Office emailed Bill Browder, a prominent proponent of sanctions legislation, on Sept. 10 after his name appeared in a foreign collusion case against pro-democracy activists. On a video call soon after, officials read him a list of countries that can extradite suspects to Hong Kong.

“They thought I should know because the new national security law of Hong Kong targets not only people in Hong Kong, but people living outside the jurisdiction,” Browder, an American-born British citizen, said by phone. “They also told me they were contacting everyone whose name was mentioned.”

The warnings underscore concern among U.S. allies that China might reach beyond its borders to prosecute people for crimes under a Beijing-drafted national security law imposed on Hong Kong last year. The sweeping legislation asserts global jurisdiction for cases involving terrorism, secession, subversion and collusion with foreign powers, which carry sentences as long as life in prison.

A spokesperson for the U.K. Foreign Office said it “cannot comment on the content of a private meeting.” Travel advice on the department’s website warns the national security law applies to “activities conducted both inside and outside Hong Kong.”

Browder, who successfully lobbied the U.S. to sanction Russian officials over human rights abuses in 2012, said officials stopped short of warning against traveling to democracies such as India or Spain. But he characterized the call as highly unusual.

“I’ve been fighting with the Russians since 2005 and I’ve never received a call like this from the Russian desk,” Browder said. “It tells me either the Foreign Office has got better at communicating with people who are in politically contentious situations -- or they are more worried about China than they were about Russia.”

Two other people who asked not to be identified confirmed the U.K. government had reached out to them. One of the people took the call as a message to watch their back in certain jurisdictions, while the other didn’t respond to inquiries on the conversation while showing Bloomberg News an email requesting a meeting.

Nine countries, including Germany, the U.K. and the U.S., suspended their extradition treaties with Hong Kong following the imposition of the sweeping legislation in June 2020.

Still, China has almost doubled its extradition treaties to more than 50 since 2012, as the country pursued fugitives overseas as part of a years-long graft crackdown under President Xi Jinping. Beijing ratified an extradition pact with Cyprus last year, and approved a similar one with Belgium earlier this year.

The Hong Kong government has cited the actions of numerous foreigners as it builds national security cases against some 76 people. Those include a handful of U.K. individuals named by activist Andy Li and paralegal Chan Tsz-wah as they pleaded guilty to collusion charges on Aug. 19.

Those allegations stem from an international public relations campaign advocating foreign sanctions against Chinese and Hong Kong officials largely in response to a police crackdown on democracy protests in 2019 -- something now deemed collusion with foreign forces under the new security law.

Though Hong Kong ostensibly has its own independent legal and judicial system, the U.K. Foreign Office website warns that those who violate the security law also risk “being detained and removed to mainland China.” The security law allows for certain cases to be tried over the border, although that right has not yet been exercised.

China has long criticized the U.S. and other Western countries for pursuing its own nationals abroad under what Beijing derides as “long-arm jurisdiction.” Most notably, Beijing has denounced American efforts to extradite Huawei Technologies Co. executive Meng Wanzhou from Canada over alleged sanctions violations.