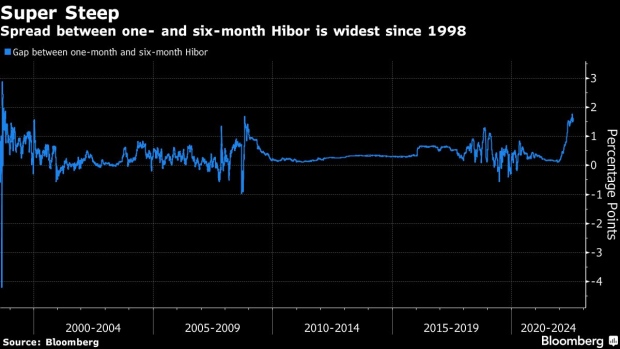 Hong Kong five-hundred and one-hundred dollar banknotes are arranged for a photograph in Hong Kong, China, on Thursday, April 23, 2020. Hong Kong's defense of its currency peg to the greenback will likely boost the interbank liquidity pool to a level unseen in two years, lowering local borrowing costs and weakening its dollars. , Bloomberg

(Bloomberg) -- A measure of Hong Kong’s interbank liquidity may need to drop further to help the local currency recover, even though the gauge has already slumped nearly 60% since May.

The one-month Hong Kong interbank offered rate, or Hibor, has risen to a succession of two-year highs since June as the Hong Kong Monetary Authority has drained cash from the financial system. Still, one-month Hibor lags behind its six-month peer by about 150 basis points. While a gap is normal, given expectations for rising interest rates, the spread between the two is near the widest since October 1998.

The divergence means the HKMA needs to drain even more cash to push local rates high enough to prevent outflows, and offset the attraction of higher US yields driven by Federal Reserve interest-rate hikes. As things stand, traders are only too happy to short the Hong Kong dollar versus its US peer.

“The very wide spread suggests Hong Kong dollar liquidity is very flush at the moment and its aggregate balance is still very large,” said Ju Wang, head of greater China foreign-exchange and rates strategy at BNP Paribas SA in Hong Kong. “Considering how steep and short this Federal Reserve cycle is, the market may try to front run, and we have seen some expectation in the market looking for higher one-month Hibor.”

The HKMA has purchased HK$208.6 billion ($26.6 billion) of local currency since May 11, more than halving the aggregate balance of the currency in the financial system to HK$129.29 billion. Goldman Sachs Group Inc. sees more upward pressure on Hibor when the aggregate balance falls below HK$130 billion, while Mizuho Bank Ltd. puts that figure closer to HK$100 billion.

The aggregate balance fell to HK$54 billion at the peak of the Fed’s 2018 rate-hike cycle, before the currency moved away from the weak-end of its trading band, BNP Paribas’ Wang said. “Judging from the current market pricing, this may be an early 2023 event” for the local currency, she said.

While the short-end gauge is a reflection of abundant liquidity, the long-end indicates Fed hike expectations.

A sustained increase in one-month Hibor -- the reference rate for Hong Kong mortgage loans -- may weigh on the city’s economic recovery. Economists predict the city’s economy may contract for the third time in four years in 2022 due to Covid restrictions and a downturn in trade.

Read More: What the Hong Kong Dollar Peg Is and Why It Matters: QuickTake