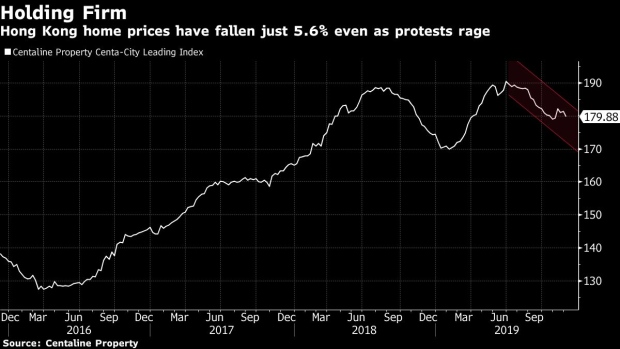 (Bloomberg) -- As Hong Kong reels from months of violent protests that have scared off tourists, smashed retailers and sent the economy into recession, one thing hasn’t wavered -- the city’s obsession with real estate.

A much-feared plunge in property prices hasn’t eventuated -- values in the secondary market have fallen just 5.6% from a record high in late June, when protests started to intensify. Sales centers for new developments are still packed, and the number of transactions between June and November in 35 estates tracked by Midland Realty International Ltd. climbed 37% from a year ago.

“There is only a small portion of the population who is not confident in the city,” said Louis Chan, chief executive officer of Centaline Property Agency Ltd.’s residential division. For the majority that are staying in Hong Kong, they still need somewhere to live, he said.

In a city where property prices more than tripled in the past two decades, despite the deadly SARS epidemic and the global financial crisis, residents have a solid belief that real estate is the safest investment.

The benchmark Hang Seng Index has risen less than 1% in the past six months, lagging behind regional and global markets. In the same time, Japan’s Nikkei index is up about 14%, and the S&P500 Index has gained almost 10%.

A relaxation of mortgage rules in October, which allows buyers to purchase more expensive homes with a downpayment of just 10%, also gave the housing market a boost, immediately pushing up sales.

Hong Kong developers aren’t inclined to speed up project sales or slash prices that would potentially lead to a slump in home values either, according to Bloomberg Intelligence real estate analyst Patrick Wong. “Their leverage isn’t particularly high so there’s no pressure for them to launch a lot of projects.”

Justin Chiu, an executive director at CK Asset Holdings Ltd. last week told the Hong Kong Economic Journal the developer has confidence in the mass residential market because more buyers are looking for a house to live in.

“When interest rates are so low and there’s no return from putting money in the bank, you might as well buy property,” said Midland’s Chan.

To contact the reporter on this story: Shawna Kwan in Hong Kong at wkwan35@bloomberg.net