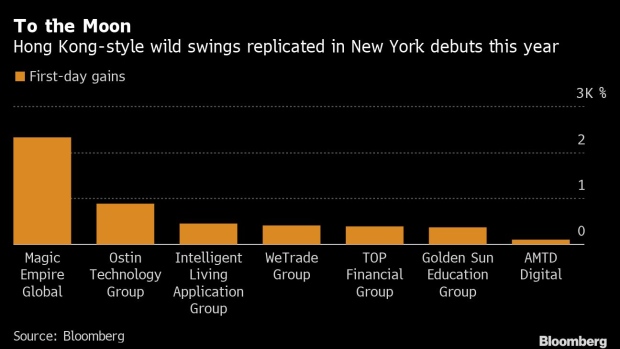 Traders work beneath a monitor displaying AMTD International Inc. signage during the company's initial public offering on the floor of the New York Stock Exchange in Aug. 2019. , Photographer: Michael Nagle/Bloomberg

(Bloomberg) -- The wild stock swings that Hong Kong regulators spent more than half a decade trying to stamp out are now popping up in New York.

Post-listing spikes of thousands of percent in two little-known Hong Kong firms over the past weeks have baffled investors in the world’s financial capital. In fact, seven of 10 tiny listings from China and Hong Kong have gone on a tear this year before sudden collapses, catching the eye of the top US regulator. Securities and Exchange Commission Chair Gary Gensler said last week that authorities are well-placed to look into wild gyrations.

For investors watching from Hong Kong such unexplained stock jumps are familiar. The city was once a hotbed of massive share moves, prompting repeated warnings from regulators on “problematic IPOs” and “ramp-and-dump schemes,” which led to a drastic tightening of listing rules that all but killed off the Asian hub’s small-cap board.

“The situation is looking a lot like what happened with penny stocks in the Hong Kong market three, four years ago,” said Kakei Lam, fund investment officer at Metaverse Securities Ltd. “Some big shareholders would try to prop up the share prices and lure in small investors.”

While New York has long been home to some of China’s biggest companies such as Alibaba Group Holding Ltd., it’s now seeing an influx of lesser-known names, especially from Hong Kong, who are seeking to avoid new hurdles in their home town. The US listing of AMTD Digital Inc., whose recent stratospheric rise captivated investors, came after an IPO of another unit of its parent company was rejected by regulators in the Chinese territory.

But the US operates under a disclosure-based system, meaning there’s no permission needed to go public. Hong Kong works through a permission-based system, which makes getting approval more arbitrary.

Hong Kong’s watchdog has clamped down on prospective issuers, raising red flags about unusually high underwriting commissions and price-to-earnings ratios as well as shares being controlled by a limited number of people. The stock exchange is tightening rules by raising the minimum profit threshold, while requiring a public offering rather than the shares just being sold to a private select group. It has warned that problematic applications will face heightened scrutiny.

Regulators also look at the type of business, setting a threshold for “listing suitability” and requiring approval from both the exchange and the Securities and Futures Commission.

Two recent volatile stocks in New York, AMTD Digital and Magic Empire Global Ltd., both qualified as an “emerging growth company” under US law, which enjoy relaxed disclosures when going public. Such companies are allowed to provide less narrative disclosure, file just two years of financial statements, and forgo an attestation of auditors, according to the SEC.

“There’s a trend of smaller companies seeking an alternative US listing due to the never-ending queries during IPO applications in Hong Kong,” said Mike Leung, investment manager at Hong Kong-based Wocom Securities Ltd., who specializes in small-cap stocks coverage. “It’s a desperate scramble to get all the advisory and audit work done, only to meet the impossible regulatory hurdle to go public in their home city.”

To be sure, AMTD Digital’s path to a US listing was not without scrutiny, especially in the wake of rising bilateral tensions.

The SEC repeatedly pressed the firm for more disclosures about its corporate structure and the potential to be influenced by the Chinese government, filings released last week show. A June 22 letter from SEC staff called on AMTD Digital to be explicit about the Chinese government’s authority to limit its ability to transfer or use cash outside mainland China or Hong Kong.

An earlier letter dated June 3 asked AMTD Digital to make clear to investors that the majority shareholder, AMTD Idea Group, could be delisted from the NYSE as soon as 2024. Regulators also pressed AMTD Digital to disclose the individuals with voting or controlling power in both AMTD Idea Group and AMTD Group Co. Ltd., the parent company of both entities.

The SEC didn’t immediately respond to a request seeking comment.

The gyrations come as Washington and Beijing try to break an impasse over audits on US-listed Chinese firms to avoid forcing companies such as Alibaba and Baidu Inc. off American exchanges. About 200 Chinese companies could be kicked off US exchanges as early as next year.

“There’s always been a concern, for at least 20 years, that Chinese companies don’t operate with the same level of disclosure and accounting norms that US companies adhere to,” said Howard Fischer, a partner at Moses & Singer and a former SEC senior trial attorney. “The fact that there is this wild run-up in the price for no reason that anyone can determine indicates that this concern might be well taken,” he said of AMTD Digital’s recent volatile trading.

For Hong Kong, the wild rides of its homegrown companies risk becoming another blemish on its reputation. Its status as a financial hub has taken a beating over the past years after Beijing cracked down on freedoms in the city and Covid restrictions shut it off from the rest of the world.

“On the current trajectory of US-China relations and the fact that neither side seems willing to throw in the towel on the PCAOB/audit oversight stalemate, I would envisage greater reputational damage being done” from these factors than the rise and fall of a meme stock, said Jane Moir, research director for Hong Kong and Singapore at the Asian Corporate Governance Association.

While it may be unfamiliar to investors outside of Hong Kong, it’s common for smaller firms in the city to engage with investors to subscribe for new shares to ensure a successful debut, along with a tacit promise to prop up prices at the start, Wocom’s Leung said.

Investors said the proliferation of wild stock moves may force US regulators to act.

“It’s a complete joke, and I expect US regulators will get involved to protect the integrity of the financial markets,” said Soren Aandahl, founder and chief investment officer at short-selling firm Blue Orca Capital LLC, adding that the firm has no position and intention to trade these stocks.

Still, Wocom’s Leung said New York may hold more promise for these types of firms. US regulators are “less parental” than their Hong Kong counterparts, he said. “It’s a buyer-beware market after all.”