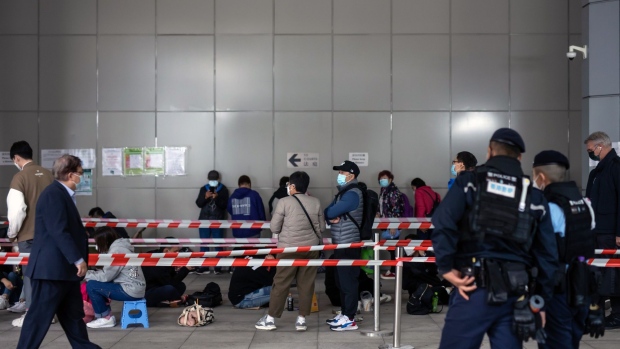 Jimmy Lai arrives at the Court of Final Appeal for the verdict of his bail hearing in Hong Kong in Feb. 2021. , Photographer: Chan Long Hei/Bloomberg

While Beijing has asserted the right to take over “complex” cases involving foreign nations since imposing a sweeping national security law on Hong Kong in 2020, it has so far not exercised the power. Instead, dozens of security cases are being prosecuted in local courts in the former British colony, where judges still wear wigs and observe English common law.

Lai’s foreign collusion case, however, is testing Beijing’s patience for Hong Kong’s legal traditions, including an emphasis on transparency, precedent, judicial independence and the rights of the accused. Those values were on display last week, when the city’s highest court ruled that the founder of the now defunct Apple Daily newspaper could hire a renowned UK-based lawyer to defend him.

Hong Kong Chief Executive John Lee, a Beijing appointee, responded by requesting China’s top legislative body to intervene and prevent lawyers based overseas from participating in such cases. Hong Kong’s sole representative on that body subsequently suggested that defendants who failed to find local lawyers could find their cases transferred to Chinese courts, where national security trials are speedier and more secretive.

“If such difficulties really arise, they can be sent back to the mainland for trial,” Tam Yiu-chung, a member of the National People’s Congress Standing Committee, told reporters Sunday in Hong Kong.

Although Tam said such action would only be necessary in a “special case,” the threat illustrates the growing pressure on the judicial independence often cited as a reason for Hong Kong’s success as a global financial center. Local courts risk being overruled by Beijing or losing control of cases altogether if they break with the government.

The issue of transferring cases to mainland courts was at the center of historically large and sometimes violent protests that erupted in 2019, which ultimately prompted Beijing to impose the security law and arrest Lai. Those demonstrations were sparked by since-withdrawn extradition legislation that would’ve allowed the city to send suspects in some criminal cases to the mainland.

“This will likely be viewed as a threat in the Hong Kong courts and legal profession to go along with Beijing’s demands or else, even when those demands are articulated indirectly through a supporter or the media,” said Michael Curtis Davis, a professor of law and International Affairs at Jindal Global University in India and a former law professor at the University of Hong Kong. “We can expect these sorts of threats to continue and be used in other high-profile cases when Beijing wants to pressure the courts or others to do its bidding.”

When asked to comment on whether a request had been made to transfer Lai’s case to the mainland, a spokesman for the government’s Security Bureau referred to Article 55 of the national security law. That section law allows Beijing to exercise jurisdiction over cases involving violations of the four crimes listed in the law under certain conditions, such as being “complex due to the involvement of a foreign country.”

Hong Kong has so far charged at least 88 people on allegations related to those four crimes: secession, subversion, terrorism and foreign collusion.

Lai, 75, is arguably the highest profile defendant still fighting charges brought under the law, which also limits defendants’ access to bail and jury trials. The one-time media mogul, who prosecutors say colluded with foreign countries by seeking international sanctions against Hong Kong and China, faces a possible life sentence if he is convicted in a trial.

Lai brought in London-based lawyer Timothy Owen, who has appeared in several high-profile cases in Hong Kong, to aid in his defense. Owen’s clients have included Rurik Jutting, a former banker convicted of murdering two women in his Wan Chai apartment in 2014.

Lee last week defended his decision to ask the NPC to issue an “interpretation” of the security law as necessary since the government had no way to ensure overseas lawyers have no conflict of interest, or haven’t been coerced or compromised by foreign powers.

“The interpretation will target one specific group of people and one specific issue and given the far-reaching implications we need to sort this out,” Lee said Nov. 28, adding that any ban wouldn’t apply to foreign lawyers based in the city.

Ronny Tong, senior counsel and a member of the government’s advisory Executive Council, said it would be hard to imagine a scenario in which a defendant couldn’t find locally based representation among the some 1,600 practicing lawyers in Hong Kong.

“I find it unthinkable to suggest that because of a shortage of available lawyers that a case would have to be transferred to the mainland for trial,” Tong said.

The decision to ask the Chinese legislature to bar overseas lawyers from security law cases has sparked concern among the foreign business community, said George Cautherley, vice chairman of the International Chamber of Commerce in Hong Kong.

“Each time you do something like this you increase concerns that this will happen not just for national security law cases,” Cautherley said. “But it’s difficult to say if it would prevent investment from coming into the city as that would depend on the level of risk people are prepared to take on for their businesses.”