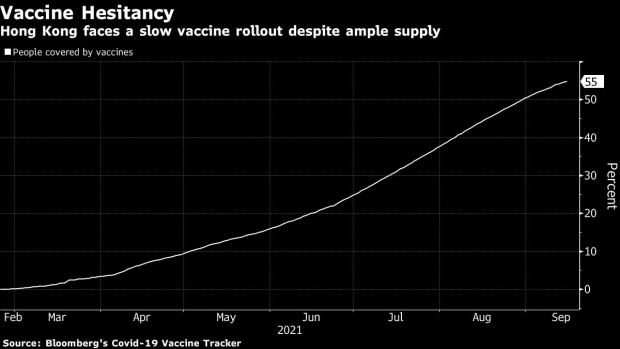 (Bloomberg) -- Hong Kong won’t consider shifting its zero-tolerance strategy to one of “living with the virus” until the vaccination rate is 80% to 90%, and its fate remains tied to China’s pandemic approach as lifting border curbs with the mainland remains the city’s priority, said a top advisor to the government.

“Covid-zero is not a long-term policy, we can try to boost the vaccination as much as we can during this policy,” said David Hui, a professor at the Chinese University of Hong Kong who leads an expert panel that advises the government.

“When we have about 80% or even 90% of vaccination rate, we may consider living with the virus instead of maintaining the zero target,” he said in an interview with Bloomberg News on Thursday.

The city is still far from that milestone, with just 58% of residents having been vaccinated with an initial dose, according to Bloomberg’s Vaccine Tracker. That lags rival financial hubs, with a figure of 82% in Singapore.

China, meanwhile, has fully vaccinated 70% of its population but has doubled down on its zero-tolerance approach and has no plans to open up to the outside world. With Hong Kong’s priority being the border with the mainland, the city will continue to be led by Beijing’s strategy even if its vaccination performance improves, noted Hui.

“Hong Kong is in a dilemma now: international chambers have been putting pressure on the government due to the quarantine policy while China is still aiming for zero infections,” he said. “If Hong Kong doesn’t follow China’s policy, it is impossible to reopen the border with them.”

Hong Kong’s travel curbs are coming under growing criticism as other places that previously kept infections low through similar rules, like Singapore and Australia, pivot toward treating the virus as endemic. The city’s quarantine measures, which mandate isolation periods for as long as 21 days, remain some of the strictest in the world and are fueling concerns that the financial hub could be left behind as others reopen.

Meanwhile, its vaccine effort is hitting a wall, with bookings falling to a record low on Sunday. A large swath of the population is refusing to get inoculated, especially the elderly: Only 13% of people aged 80 and above have received at least a dose.

Hui said that opening the border with the mainland, crucial to Hong Kong’s economy, is not up to the city. Beijing has not given “definite instruction,” he said, “but we have to maintain no local cases for a consecutive period with a high vaccination rate.”

Hong Kong has reported just two unlinked local cases in the past three months. Neither led to further transmission, making it one of the most Covid-free places in the world. Yet the continued isolation is hurting its reputation as a financial hub where global businesses gather.

Hui said that it remains to be seen if abandoning the zero-tolerance approach is feasible even when inoculation is widespread.

Even Singapore is now “under pressure” though its vaccination rate is over 80% and the rate is high among elderly, said Hui. Singapore is now seeing daily infections approach the four-figure mark as it slowly reopens.

“So, this direction may be a bold experiment like gambling for now,” said Hui.