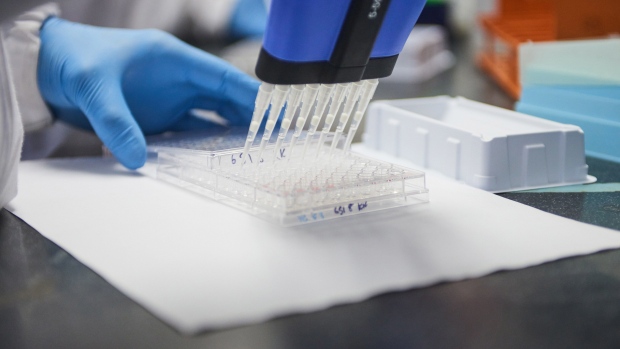 A technician uses a multi-channel pipette dropper to dispense material during Covid-19 antibody neutralization testing in a laboratory at the African Health Research Institute (AHRI) in Durban, South Africa, on Wednesday, Dec. 15, 2021. South Africa’s hospital admission rate as a percentage of new Covid-19 cases identified dropped sharply in the second week of the current infection wave driven by the omicron variant, compared with the same week of the third wave. Photographer: Waldo Swiegers/Bloomberg , Bloomberg

(Bloomberg) -- Horizon Therapeutics Plc rose by the most in more than three years after the drug developer disclosed it’s in talks with a trio of potential suitors about a possible sale of the company.

Amgen Inc., Johnson & Johnson and Sanofi are separately engaged in preliminary discussions with Horizon, the company said in a statement on Tuesday. There’s no certainty that any of the talks will lead to an offer. Dublin-based Horizon makes drugs for rare autoimmune and inflammatory diseases.

Horizon soared 27% at 11:38 a.m. in New York and earlier was up 30%, the biggest intraday gain since February 2019. The surge brought its stock-market valuation to $22.7 billion. The company’s shares had dropped 27% this year through Tuesday’s close.

Emerging from the exhausting focus on Covid-19, big drugmakers are resuming their search for innovative therapies, especially for those that treat rare diseases and cancer. Merck & Co. earlier this year scuttled an estimated $37 billion bid for oncology drugmaker Seagen Inc., though it agreed this month to purchase Imago BioSciences Inc. to gain therapies for rare bone marrow conditions that lead to overproduction of blood cells.

The company gets almost half of its $3.6 billion in annual sales from Tepezza, a treatment for a painful autoimmune condition called thyroid eye disease. Other top drugs include Krystexxa for chronic gout and Ravicti, a treatment for inborn urea disorders.

While Horizon appears to be a “willing seller,” the deal is likely to be an expensive one, Wells Fargo analysts said in a note to investors, citing a likely takeover price of around $135 a share. Horizon closed Tuesday at $78.76. Of all three suitors, Sanofi looks like the best potential fit given its compatible portfolio with Horizon’s, analysts said.

Under Irish law, each company would have until 5 p.m. New York time on Jan. 10 to either step up with an offer or say it’s backing out, Horizon said in the statement. The company has US operations in Deerfield, Illinois, and Rockville, Maryland.