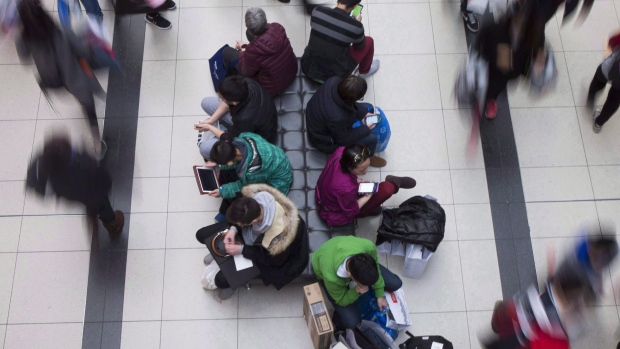 Canadian consumers with a hunger for debt are carrying the national economy, but it’s an appetite that will soon be put to the test by policies that could – if mishandled - trigger a recession, warn economists.

“It’s not unreasonable to assume that the next recession will be a consumer-led recession,” Benjamin Tal, deputy chief economist at CIBC Capital Markets, told BNN in an email.

“The bottom line is that the consumer has not been tested yet.”

If there are dark clouds on the GDP horizon, they have yet to darken Canada’s economic skies. The country posted its strongest growth rate in nearly six years in the second quarter, at 4.5 per cent.

Residential construction, another economic pillar that naysayers have long said was due for a pullback, fell 4.7 per cent.

“At some point, exports, capital spending and even infrastructure spending will have to step up to carry the load,” Doug Porter, chief economist at BMO Capital Markets, told BNN.

“We simply can’t count on the consumer (and housing) to continue leading growth in the years ahead.”

While the rise in capital spending is “good news,” Porter said he’s “not sure we can call it a rotation yet, as consumer spending was also still very strong.”

“At least we can say growth now looks much better balanced, and it may be the first real signs that a rotation away from a reliance on consumers/housing alone has begun.”

As goes the broader economy goes the earning power of the banks. Canada’s Big Six handily beat expectations this earnings season, with strength in domestic banking a dominant theme across the sector.

But the Canadian appetite for borrowing will be tested by three events that will “cause the credit cycle to either shift in reverse or take a pause,” said David Rosenberg, chief economist and strategist at Gluskin Sheff + Associates.

“One is the fact that the Bank of Canada is raising rates,” Rosenberg told BNN in an email.

Indeed, the bank’s next opportunity is on Wednesday, and the strong GDP report is putting a hike on the table despite the lack of a monetary policy report or news conference attached to the rate announcement.

Second, falling home prices in the Greater Toronto Area will “cause the banks to become more cautious on mortgage originations,” further testing borrowers, according to Rosenberg.

While Canadians have been hectored about their debt by policymakers for years, the actual policy environment has been very friendly to borrowers.

Policymakers, however, need to tread carefully.

“With household debt at extremely dangerous highs, any tightening in household credit conditions runs the risk of causing a recession,” said Madani.