How ION Energy is ready for the third wave of the clean energy revolution - BNN Bloomberg
{{ currentBoardShortName }}
Markets
As of: {{timeStamp.date}}
{{timeStamp.time}} 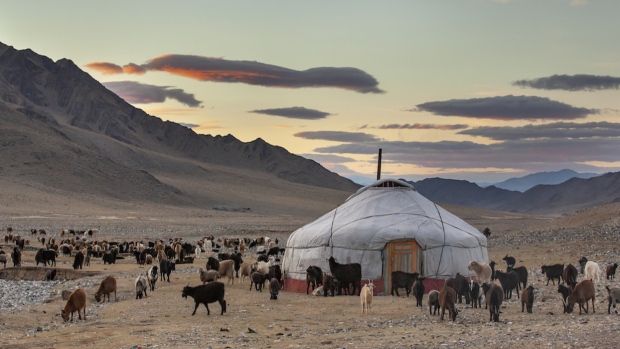 A traditional Yurt in Mongolia, a type of tent very popular throughout the country. , Image courtesy of Market One Media

And while the EU and the U.S. lag China in terms of global BEV share, there’s clear momentum for clean-driving EVs in those markets as well.

China is also the dominant player in the downmarket supply chain for the batteries that power these vehicles. A recent report by Benchmark Mineral Intelligence states that 89 of the 123 battery mega factories in the global pipeline are being built in China.

“ION Energy is well poised to become a major player in the battery metals space.”

All in all, this is an environment tailor-made for ION Energy (TSXV: ION), a company newly listed on TSXV that controls the first lithium brine exploration project in Mongolia. Located within 24 km of the country’s border with China, ION Energy’s Baavhai Uul project is ideally positioned to feed China’s ravenous demand for lithium-battery powered EVs.

Celebrating our recent @tsx_tsxv listing with the dedicated @IonEnergyLtd_ team, as we opened the market this morning! #ringthebell #tsx #lithium #investing #Mining https://t.co/jAHpk1Brvi

Moreover, a recent report by Couloir Capital on ION Energy pointed to the company’s potential to develop a lithium brine resource on China’s doorstep as a key, strategic advantage. The report didn’t provide a target price for ION’s shares, but it did posit a valuation, based on its hectares under option in Mongolia, of $37 million on an enterprise value/hectare basis.

That’s more than double ION’s current valuation based on current trading levels. The company’s CEO and Director, Ali Haji, comments, “ION Energy is well positioned to become a major player in the battery metals space. Especially now, given that governments around the world are touting a green recovery from COVID. This is a clean energy revolution.”

Haji is betting that the large land position (~80,000 ha) that ION has secured with its Baavhai Uul project will make the company a go-to in China’s (and the entire region’s) lithium supply chain.

Baavhai Uul has a crucial location advantage over the lithium brine producers of South America, which currently generate a large portion of the world’s brine-based lithium. The project’s land package is one of the largest ever granted in Mongolia and represents its first lithium brine licence.

To date, all holes drilled on the project have contained significant levels of lithium, with an average grade of 426 parts per million (ppm) lithium and a maximum grade of 811 ppm. The project’s location in the Gobi Desert allows for high-evaporation rates, a key component of a successful lithium brine operation.

Haji adds, “Mongolia is strategically located between Russia and China, with its proximity to China making it a particularly compelling play. Plus, the battery markets of Taiwan, Korea, and Japan are all within ‘earshot.’” In addition, the country offers a political landscape that is supportive of mining and extraction.

Building the right team for the job

Haji has built a powerful in-country team that has a proven track record in lithium exploration and development.

The company’s key players include:

“Having operated in Mongolia for the last 10 years, we were confident that it is an underexplored region with a vast amount of potential,” says Haji. Between the ION team’s background in lithium plays and its experience in Mongolia, the company is set up for success in the country.

The company has achieved many milestones over the last year including obtaining a licence by the Mongolian government to commence its exploration efforts.

With its TSXV listing completed and a financing that raised over $2.75 million, ION Energy is set to begin its two-phase exploration program to fully assess Baavhai Uul’s potential as a lithium brine project.

That work program will start with a seismic analysis of the two largest targets on the property, followed by a geophysical survey to further define drill targets. The goal is to drill the project by the end of the year and release results from that effort in the first two quarters of 2021.

Haji explains, “This is a massive, 81,000 ha licence. As such, we want to take our time to ensure we’re getting the right targets the first time around.”

As investors scan the energy metals sector for the best way to play the EV and green energy trends, ION Energy stands out as a geographically well-positioned lithium company, one capably managed and, according to Couloir Capital’s recent report, significantly undervalued. ION is now fully funded to commence an aggressive growth strategy for the remainder of the year.

Learn even more about ION Energy by visiting their website here.

Ion Energy trades on the TSXV under the stock symbol ION.