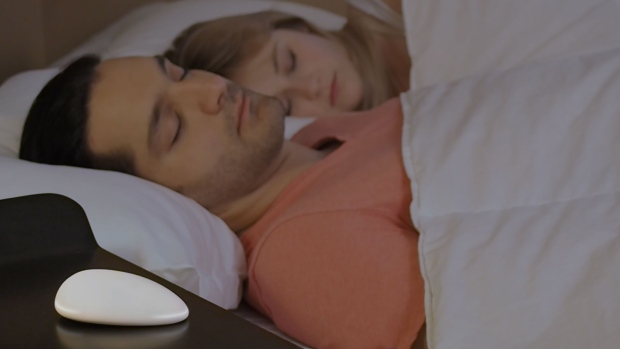 If the sound of snoring is keeping you up night after night – and you’ve tried everything from nose strips and hypnosis, to poking your partner in the ribs with no success – one Toronto-based startup says it has the solution for you.

Smart Nora has created a smart pillow system that the company says will help open a snorer’s airway. Snoring occurs when throat muscles relax and a person begins breathing into their partially obstructed airway, which vibrates and causes snoring sounds.

The company’s Nora system includes a white pebble-shaped sensor that can be placed on a nightstand, which monitors and listens for snores. When the sound of snoring starts to pick up, the monitor wirelessly activates a fabric mat that slowly inflates inside your pillow.

“Before your snoring gets too loud, [the fabric mat] creates a gentle motion in the pillow, causing a slow rise and fall,” Behrouz Hariri, Smart Nora’s co-founder and product lead, told BNN. “What happens is, it stimulates the throat muscles to let you breathe normally.”

This all happens without waking up either the snorer or his or her partner, Hariri said.

“The best part is it’s truly non-invasive,” he said.  “Typically the wife who is the victim of the snoring is over the moon, getting sleep for a whole week [for the first time in] years. And the husband is like, I didn’t feel anything.”

In about six months, Nora has received more than $1 million in pre-orders directly from customers around the world – first through a Kickstarter campaign and then its site built on Shopify’s ecommerce platform, Hariri said.

The Nora anti-snoring system was built upon a product Hariri’s father, Ali, invented, when he noticed how his wife and himself dealt with each other’s snoring – by slowly moving the snorer’s pillow.

“[Nora is] inspired by our own problem with snoring, it came as a solution to a personal problem,” Hariri said.

The company says Nora will begin shipping in November this year.