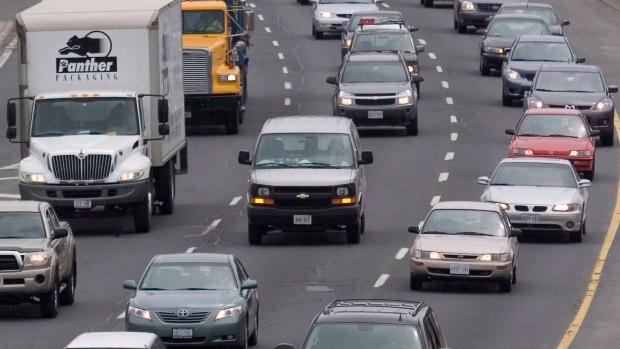 Cars makes their way along a congested highway in Toronto on April 26, 2007. , THE CANADIAN PRESS/Lars Hagberg

MONTREAL -- Car insurance rates are on the rise across the country, but if you're willing to make a few adjustments you can find ways to insure your ride without breaking the bank.

In Alberta, auto insurance prices climbed more than 16 per cent, a new record for the province.

"The best advice I can give on getting the best rate is, be a safe driver," said Pete Karageorgos, head of consumer and industry relations at the Insurance Bureau of Canada.

That means no collisions where you're at fault and no traffic violations -- aside from parking tickets -- such as speeding. Accidents can impact your premiums for more than six years.

Raising the deductible can save you cash, but there's a catch. Upping the threshold that the policyholder is responsible for -- from $500 to $1,000, for example -- means you'll have to pay more out of your own pocket in the event of a crash, he said.

And with today's increasingly high-tech vehicles coming equipped with side-view sensors and back-up cameras, trips to the repair shop are getting costlier.

"Even a small fender bender requires sensors to be reprogrammed, cameras to be reset," Karageorgos said.

Motorists with an older vehicle that has dropped significantly in value should consider dropping their collision or comprehensive coverage -- which covers fire, theft or vandalism, he added. If the car has a sale value of a few thousand dollars, it's likely not worth the premiums nor the deductible costs in the event of a serious collision.

Over the past six years, insurance companies have increasingly offered in-car monitoring devices that reward clients for good driving.

Desjardins General Insurance's Ajusto program, now in the form of an app, records data such as braking speed, acceleration and "fast cornering" as well as frequency of travel, time of day and handheld phone use -- "which is a no-no," Desjardins spokesman Joe Daly said.

"If you're driving during rush hour in Toronto or Montreal, you're much more likely to get into an accident," he said.

The monitoring program can result in discounts of up to 25 per cent, he said.

"You may have a young driver in the household who's just as safe as the parents, and through the use of one of these devices, it could back that up," Daly said.

"The way you are entering the car, the app can detect whether you're the driver," noted Julie Nolette, vice-president at Intact Insurance, whose app draws on a smartphone's GPS and accelerometer.

Make and model are also key to determining premiums, as cars more likely to be stolen come with higher insurance prices.

In 2018, the top five vehicles on the Insurance Bureau of Canada's hot list were all heavy-duty Ford pickups from between 2003 and 2007.

If you happen to own a high-risk vehicle, installing an anti-theft device can slightly offset your premium.

"Any kind of a souped-up sports car will cost you more to insure," Daly added. "Generally they're driven fast, recklessly." Hybrid or electric cars, on the other hand, often mean less expensive plans.

Providers offer a range of other routes to lower prices.

Bundling plans through home insurance or multi-vehicle discounts are one option, while winter tires, while mandatory in Quebec, can yield cheaper premiums elsewhere.

"If you park in a driveway or a garage it'll be cheaper than parking in the street," Daly said.

Justin Thouin, co-founder of Toronto-based LowestRates.ca, suggests shopping around each year, though B.C. -- which has the priciest car insurance in Canada on average-- Manitoba and Saskatchewan have government-run auto insurance markets.

There can be thousands of dollars' difference between the cheapest and the most expensive, Thouin said.

"It can be the cheapest one year and the most expensive the next. So it's super-important to compare every year."