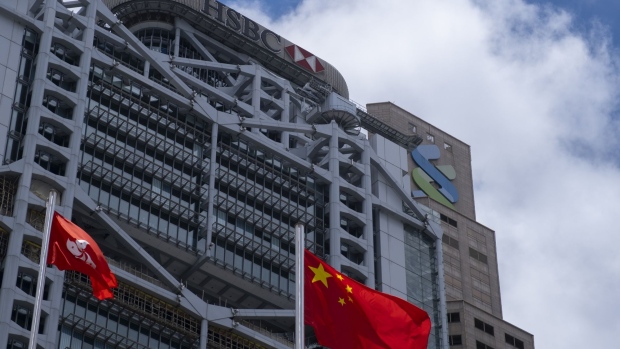 (Bloomberg) -- HSBC Holdings Plc, which draws more than two-thirds of its pretax income from Hong Kong, slumped in early trading after a report that the U.S. is mulling a move to punish banks in the city and destabilize the currency peg to the dollar.

HSBC fell as much as 3.1% in Hong Kong, the most in more than three weeks, making it the biggest drag on the benchmark Hang Seng Index. A Hong Kong-based spokeswoman declined to comment on the U.S. report.

London-based HSBC is walking a political tightrope in its attempts to further push into the world’s most populous nation. The bank last month endorsed China’s new security law and is now drawing further criticism from politicians in the U.S. and the U.K.

In a statement on its official WeChat account last month, the bank pledged to continue to invest and support the Chinese economy after speculation in local media that its massive restructuring plan would mean an exit from China.

Some top advisers to President Donald Trump want the U.S. to undermine the Hong Kong dollar’s peg to the U.S. dollar as the administration considers options to punish China for recent moves to chip away at Hong Kong’s political freedoms, according to people familiar with the matter. HSBC is also the largest note-issuing bank in Hong Kong, putting it at more risk than Standard Chartered Plc. and BOC Hong Kong Holdings Ltd.