Canadian telcos to spend $8.9B on 5G spectrum

Canada’s telecommunications companies will pay $8.9 billion (US$7.2 billion) to buy licenses for 5G wireless airwaves, with Rogers Communications Inc. spending the most to protect its No. 1 position in the market.

Rogers committed $3.3 billion in the government’s spectrum auction. The company is in the midst of trying to buy rival Shaw Communications Inc. for about US$16 billion, a deal that faces potential obstacles from antitrust regulators because it would merge the largest and fourth-largest wireless companies in Canada.

Montreal-based Quebecor Inc., led by Chief Executive Officer Pierre Karl Peladeau, spent $830 million in the auction, buying licenses in parts of western Canada and Ontario where it doesn’t compete today. Peladeau has expressed an interest in expanding services and taking up the mantle of Canada’s fourth player -- and possibly buying Shaw’s Freedom Mobile unit if regulators force Rogers to sell it.

Although the spectrum price tag is negative in the near-term for Rogers’ stock, “the path to regulatory approval for the Rogers-Shaw transaction has become clearer” given “Quebecor’s unexpected ability to acquire set-aside spectrum outside of its existing cable and wireless footprint,” RBC Capital Markets analyst Drew McReynolds said in a note to investors.

Shaw’s shares have remained about 10 per cent below the $40.50 price offered by Rogers. 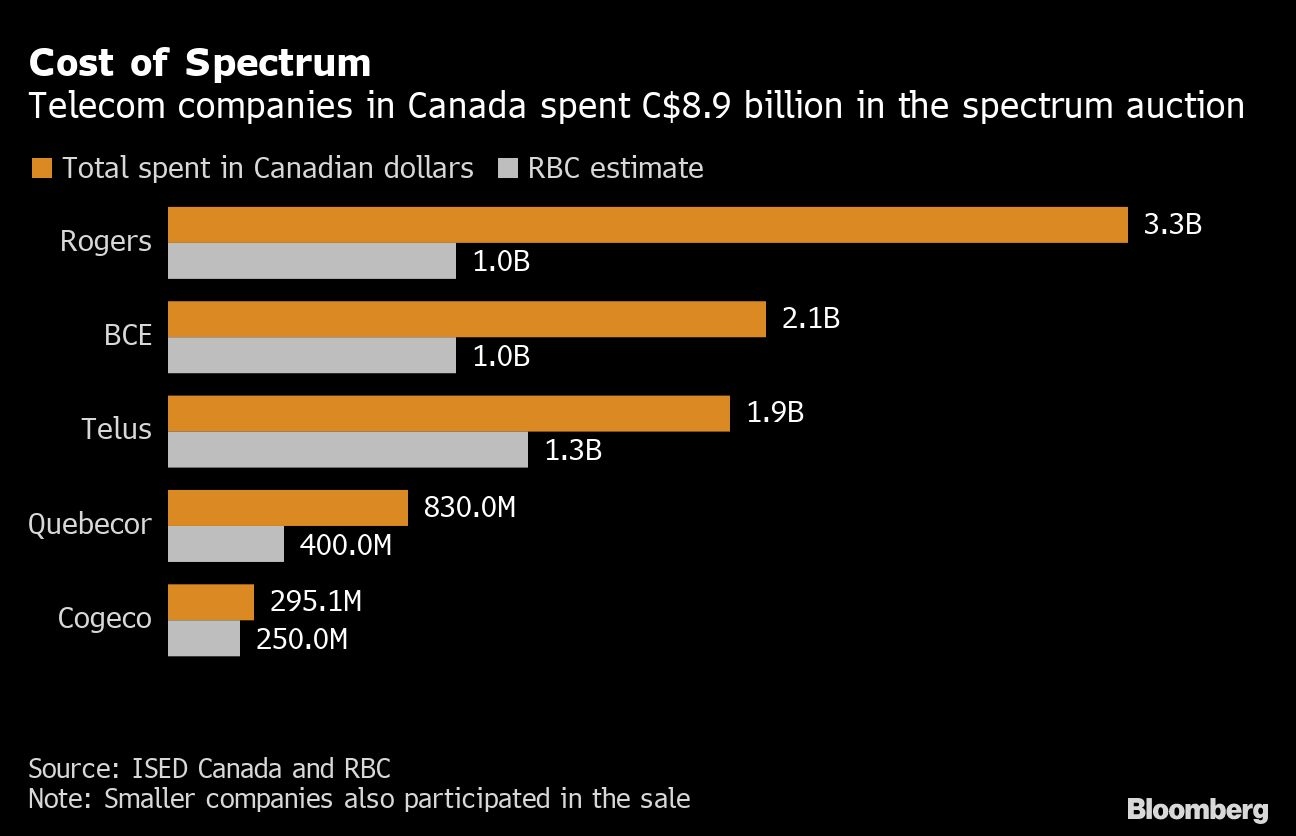 BCE Inc. spent $2.1 billion and Telus Corp. more than $1.9 billion, according to a statement by the industry ministry. Those two companies and Rogers dominate the sector with more than 10 million wireless customers each.

Spectrum is never cheap, but the amount is far more than what analysts expected, another sign that so-called midband frequencies are viewed as crucial by wireless companies seeking to establish an edge in 5G services. A U.S. midband auction earlier this year resulted in more than US$80 billion in spending, led by Verizon Communications Inc. and AT&T Inc.

Investors had anticipated that the overall figure in the Canadian auction would be $5 billion to $6 billion. In earlier forecasts, McReynolds projected the three largest companies would spend a combined $3.25 billion -- slightly less than the final amount spent by Rogers alone.

“We went into this auction with a clear plan and acquired the spectrum we need to continue driving the largest and most reliable 5G network in Canada and to deliver long-term value for our customers, shareholders and Canada,” Rogers CEO Joe Natale said in a statement.

“We are now counting on the government to create a favorable environment to foster and maintain healthy competition,” Peladeau said in a statement. “We are confident that we are the right player, the one with a real ability to break the oligopoly and put consumers across Canada back in the driver’s seat.”

Cogeco Communications Inc., a regional cable provider that doesn’t currently sell wireless services, spent $295 million in the auction. Its licenses cover its home province of Quebec, as well as the Greater Toronto Area, where it has a wireline footprint.

Telus CEO Darren Entwistle said that “Canada’s position as a global leader in broadband networks is vulnerable to burdensome regulations governing access to spectrum.” He added: “We need responsible, forward looking and predictable regulatory policy that ensures affordable, fair and expeditious access to this national asset so we can continue building our world-leading networks.”