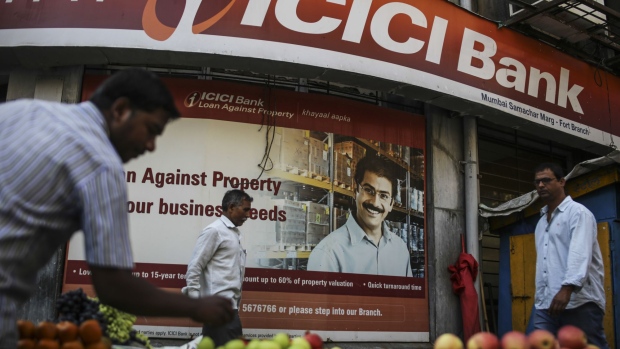 A roadside vendor arranges fruits at a stall as pedestrians walk past a ICICI Bank Ltd. branch in Mumbai, India, on Friday, Jan. 27, 2017. While economists urge more investment in roads, ports and railways when the Indian government presents its budget Feb. 1, and maybe even direct cash transfers to boost consumption, a splurge carries the risk of a rating downgrade. , Bloomberg

(Bloomberg) -- ICICI Bank Ltd. posted a 59% rise in profit in the March quarter, helped by a drop in bad loans and growth in income from lending.

Net income stood at 70.2 billion rupees ($918 million) for the three months ended March, compared with 44 billion rupees a year ago, according to an exchange filing on Saturday. That beat the average estimate of 63.5 billion rupees by 12 analysts in a Bloomberg survey.

The results follow HDFC Bank Ltd., which saw a 23% rise in profit but missed estimates due to muted income from fees. HDFC Bank plans to take over its parent and the country’s biggest mortgage financier Housing Development Finance Corp., which will make the combined entity twice as large as ICICI Bank.

The gross bad-loan ratio at ICICI Bank narrowed to 3.6% at the end of March, from 4.13% three months ago. It set aside 10.7 billion rupees in provisions during the fourth quarter, almost a third of 28.8 billion rupees in the year year ago, filings show.