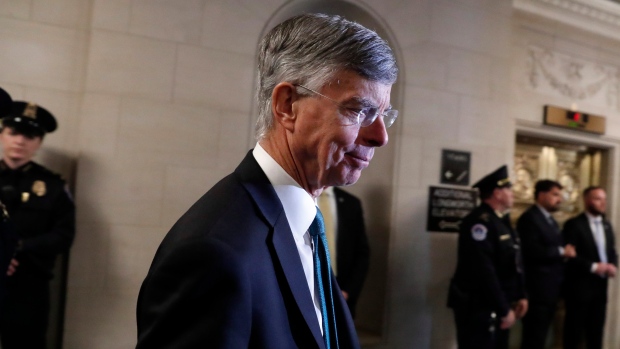 The first day of public testimony in the House impeachment investigation of Donald Trump featured sharp exchanges, a fresh revelation and two decorated public servants detailing their concerns that the president tried to leverage his office for personal political gain.

But the historic proceedings also exposed the risks for both parties over the White House’s refusal to provide access to documents and witnesses. Republican attacks Wednesday on the lack of firsthand accounts inadvertently spotlighted the obstructive nature of Trump’s decision to block cooperation. But they also showed the limits of the decision by House Democrats to speed through an inquiry that many of them hope will end with a vote to impeach the president before the end of the year.

The opening statement of William Taylor, the top U.S. diplomat in Ukraine, delivered one new bombshell: one of his staff overheard the president asking Ambassador to the European Union Gordon Sondland about “the investigations.”

Moreover, he said, Sondland told that aide afterward that Trump cared more about an inquiry into former Vice President Joe Biden than U.S. policy toward Ukraine.

Taylor also concurred with the day’s other witness, State Department Ukraine specialist George Kent, who testified he was alarmed by efforts by Rudy Giuliani, Trump’s lawyer, to “gin up politically motivated investigations.”

But neither could recount a direct conversation with the president or his associates most closely involved in the pressure campaign, depriving Democrats of a smoking gun that would erase all doubts that Trump was self-dealing with foreign policy.

Instead, the testimony planted questions that lingered over the hearing but didn’t get answers.

What were former National Security Advisor John Bolton’s concerns with the efforts by Giuliani and others that he allegedly likened to a “drug deal”? Did the president ever advise his chief of staff to hold aid or block an Oval Office meeting if he couldn’t get an investigation into the Bidens? And was the testimony of Taylor and Kent – bolstered by text messages and contemporaneous notes – further validated by a cache of documents at the State Department and Office of Management and Budget that the administration has refused to turn over?

Republicans sought to exploit that opening, painting the entire exercise as fruitless and motivated primarily by the desire of Democrats to drive Trump from office after failing to beat him at the ballot box.

Jim Jordan, the Ohio Republican who House Republican leaders moved onto the Intelligence Committee to help lead the impeachment defense, peppered Taylor with questions that emphasized the envoy in many cases was speaking from secondhand knowledge.

Had he listened in on the phone call between Trump and Zelenskiy? Spoken to White House chief of staff Mick Mulvaney? Met the president? In each case, Taylor responded in the negative.

And Mark Meadows, the North Carolina Republican and former Freedom Caucus chairman closely aligned with the president, dismissed the hearing as “boring” and hearsay.

At the White House, Trump pressed the same point.

“I’ve heard just a report they said it’s all thirdhand information, nothing direct at all,” Trump said at a news conference with Turkish President Recep Tayyip Erdogan. “It can’t be direct because I never said it.”

He denied any recollection of the conversation with Sondland that Taylor described.

The GOP strategy was certain to prompt some second-guessing among Democrats, who have largely abandoned legal efforts to compel Mulvaney, Bolton and Giuliani to testify after the White House ordered them to ignore subpoenas. Democratic leaders are passing on a court battle because it would further delay an impeachment process already threatening to drag into a crucial election year.

Kent did dent Republican efforts to justify the president’s behavior, saying there was “no factual basis” for allegations that Ukraine interfered in the 2016 election or that Biden acted improperly when pushing for the firing of a Ukrainian prosecutor.

In the hearing room inside the Longworth House Office Building, Democrats argued that firsthand accounts weren’t necessary considering the mountain of testimony already provided by witnesses who have appeared before the panel.

“Hearsay can be much better evidence than direct, as we have learned in painful instances,” Eric Swalwell, a California Democrat, said during his time questioning the witnesses.

Others on the panel said the complaint only bolstered their case for bringing an impeachment charge of obstruction against the president, with Intelligence Chairman Adam Schiff arguing that Trump’s stonewalling represented a dangerous erosion of the Constitution’s checks and balances. Mike Quigley, an Illinois Democrat, used his questioning to emphasize that the State Department had instructed employees not to cooperate with the probe and refused to turn over relevant documents.

“It’s extraordinary to me that the committee has been able to get as much information as they have, direct or hearsay, given the obstruction,” Quigley said.

Schiff, who is leading the impeachment inquiry for House Democrats, plans additional public hearings with nine more witnesses over the next eight days, as well as some additional closed-door sessions.

Outside the chamber, critics of the president said Republicans were seeking to have it both ways.

“If Republicans want to get beyond hearsay, they should state publicly that they want Mulvaney, Pence, Pompeo, and Bolton to testify,” said former Obama administration ambassador Michael McFaul. “Easy day.”

It was a contradiction Republicans had little answer for. Asked about the friction, Meadows offered simply that the testimony of Mulvaney and other top aides “would never happen and it never will.”

“You can’t go into that inner circle,” he said. “It puts a chilling effect on the president of the United States to do his job.”