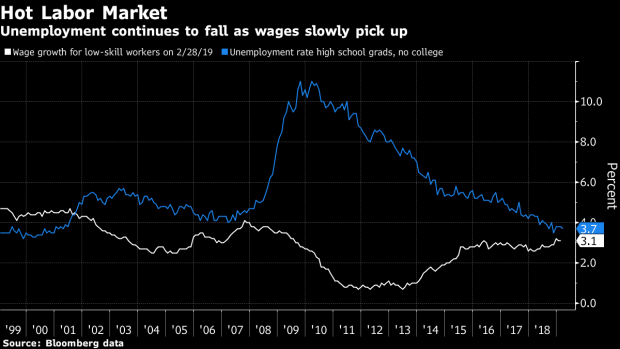 (Bloomberg) -- You’d need a cast of thousands to re-enact Black Friday at a Walmart store, so virtual reality comes in handy at the company’s training centers. Employees get to experience a shopper stampede on their headsets, part of a widening national effort that encompasses some 7,000 workers a week.

The retail giant isn’t alone. From hotels to fast food chains, employers in service industries are setting up training programs or revamping the ones they have.

That’s what is supposed to happen in a tight labor market, a description that fits the U.S. where unemployment is at a 49-year low. Since there’s competition over a diminishing pool of workers, companies have to lower requirements at the entry level -– then spend more time and money training the people they hire.

“If you’re in a relatively low-wage labor market in the service sector -- say Starbucks, Walmart, McDonald’s -- notice that they all have training programs now,’’ says Anthony Carnevale, director of the Georgetown University Center on Education and the Workforce. It’s “one of the things that a healthy economy encourages.’’

There’s a shortage of data on workplace education, because the Bureau of Labor Statistics hasn’t surveyed the topic for more than 10 years. Still, something seems to be stirring. One reason may be that technology is lowering the cost of training, always a deterrent for employers.

“They’re far more willing to spend money on technology and software to train people than they are to hire trainers,’’ says Peter Cappelli, director of the Center for Human Resources at the University of Pennsylvania’s business school.

That’s an opportunity for startups like four-year-old Strivr Labs, which designs VR programs to simulate Black Friday at Walmart, or an attempted robbery at a Verizon office.

Strivr Chief Executive Derek Belch describes how one of his modules is used at low-cost airline JetBlue, to teach staff how to do a quick “walkaround” cabin inspection in between flights. It’s hard to do that on an actual plane, he says, “because it has to go fly in 20 minutes.’’ Without virtual reality, the carrier would have to rent a plane for training, or pay overtime to do it late at night.

On top of in-house education, companies like JetBlue, Walmart and Chipotle offer programs that link up to college credits, and they’ve stepped up tuition reimbursement plans.

Walmart employees can pursue an associate’s or bachelor’s degree at three nonprofit schools for a $1 a day. Kourtney Miller, 29, signed up after eight years at the retailer, and says she’s started getting inquiries from colleagues. She said one question that often gets asked is: “They’re saying it’s a dollar a day, is it true?”

Such programs can go at least some of the way to redressing an imbalance in training, Georgetown’s Carnevale says: it tends to be “the more educated and higher-skilled workers’’ who get more of it -- and who then get paid better as a result. Less-qualified employees risk getting excluded, and Carnevale says that women have historically benefited less than men too.

One objection to training that keeps resurfacing among employers is: what if workers pocket the new skills, and take them elsewhere? “They thought they could hire the people with talent, rather than having to develop it internally,’’ says Cappelli at Wharton.

The tighter the labor market gets, the less force that argument carries. Some companies like JetBlue still require some kind of no-quit commitment from staff who participate in college programs. Others don’t. If employees gain a degree, “they can use that at Walmart, hopefully,’’ says Drew Holler, a senior vice president at the retailer. “Or they can go use that somewhere else.’’

Walmart’s initiative is fairly new, but JetBlue and Chipotle say that internal surveys show an increased commitment to the company among student-employees who enroll.

While workforce training may have picked up lately, it remains much less widespread than it used to be, according to Brad Markell, executive director of the Industrial Union Council at America’s biggest labor group, the AFL-CIO. “Companies just don’t train like they used to,’’ he said.

Cappelli agrees that there was probably a lot more help on offer from employers 30 years ago. And he says college-linked programs shouldn’t be exaggerated either: they’re often limited in scope, offering online classes only or restricting students to a single course.

Still, employers aren’t “claiming that this is all about building American skills,’’ he says. “They’re trying to do it to build the workforce that they need right now. And that’s OK.’’

--With assistance from Craig Torres.

To contact the reporters on this story: Shelly Hagan in New York at shagan9@bloomberg.net;Carlyann Edwards in Washington at cedwards136@bloomberg.net

To contact the editors responsible for this story: Alex Tanzi at atanzi@bloomberg.net, Ben Holland, Sarah McGregor