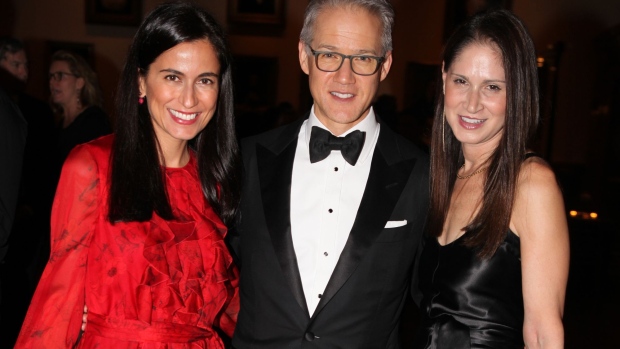 Tali Farhadian Weinstein with Chris and Beth Kojima , via Bloomberg

(Bloomberg) -- It’s the real-life “Law & Order,” the bane of mobsters and crooked politicos, killers and Wall Street greed, and one that gets a peek into President Donald Trump’s tax returns.

Now the office of the Manhattan district attorney, one of the most coveted prizes in American law, is again up for grabs -- and the list of contenders is growing to unseat Cyrus Vance Jr. in the polls next year. The latest is Tali Farhadian Weinstein, a seasoned federal prosecutor with an unusual insight into the ways of Wall Street: She’s married to Boaz Weinstein, the hedge fund magnate behind the $3 billion Saba Capital.

The 44-year-old is an experienced lawyer, having spent much of the last decade in various roles at the Department of Justice. She’s also a Rhodes Scholar who clerked for Supreme Court Justice Sandra Day O’Connor.

Yet at a time of gaping economic inequality, some may question whether Gotham’s public avenger should be drawn from the ranks of the 1%. Tali and her husband are prominent fixtures in the city’s social circuit, splitting time between their Fifth Avenue penthouse and a Hamptons home, and Boaz’s hedge fund is having its best year ever profiting from the market mayhem.

People familiar with Farhadian Weinstein’s plans discussed her intent to announce her run as soon as Monday. A representative declined to comment on her behalf.

The office has a penchant for attracting cases that make splashy headlines -- drawing scrutiny for its actions tied to Harvey Weinstein, arresting Jeffrey Epstein and even tangling with President Trump. On that front, the office just scored a Supreme Court victory to examine the president’s tax returns.

And with a seat in the heart of the global financial capital, the role can hold immense sway over Wall Street.

The D.A.’s office is no stranger to wealth and privilege. Vance, who has been in the job for over a decade, is the son of the former secretary of state to President Jimmy Carter. He has yet to indicate whether he will run for re-election in a race that now features at least a half-dozen other contenders in the Democratic primary.

His predecessor was the legendary Robert Morgenthau, whose tenure began in 1975 and stretched over four decades. Morgenthau was a descendant of one of the Lehman Brothers, son of President Franklin Delano Roosevelt’s Treasury secretary and a friend of the Kennedys.

Tali Farhadian Weinstein moved to the U.S. with her Iranian family in 1979, with a fake tourist visa to seek asylum.

After the Yale Law School graduate started her legal career as a clerk for O’Connor, the first woman to sit on the Supreme Court, she served as a counsel to former attorney general Eric Holder and as an assistant U.S. attorney in the Justice Department for six years.

She married Boaz in 2010. As her husband’s wealth increased, they mingled in the upper echelons of New York’s philanthropic and social circles. That includes her appointment to the board of the New York Public Library, joining a roster that includes Steve Schwarzman and Jim Tisch and attending benefit dinners featuring Steven Mnuchin, Chuck Schumer and Jim Simons.

Most recently, she has been the general counsel at the Brooklyn district attorney’s office. She resigned from that role last week.