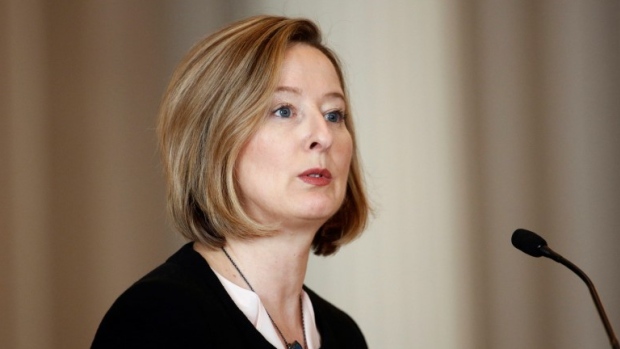 Carolyn Wilkins with Bank of Canada takes part in an event in Ottawa, Ontario, Canada on February 10, 2015. , Reuters

Canada's household sector is vulnerable to any kind of negative shock due to its high level of indebtedness, but stress tests show Canada's banking system should weather a drop in house prices, Bank of Canada Senior Deputy Governor Carolyn Wilkins said on Tuesday.

Speaking at an IMF panel in Washington on financial stability and systemic risks, Wilkins said a lot of the household debt in Canada is concentrated with young or low income segments of the population, as well as in regions with high house prices, such as Toronto or Vancouver.

"In the case of Canada, the vulnerability we're thinking about right now is indebtedness in the household sector, which has been on an upward trend for a number of years and has reached levels that say to us the household sector is vulnerable to any kind of negative shock," Wilkins said.

She said the central bank had conducted stress tests to gauge the impact of a drop in home prices on some regions of Canada, as well as a broader decline in property prices caused by a recession or other factors that reduce demand.

"In either case ... when we apply those stress tests to our large Canadian banks, the core of the Canadian banking system, the capital levels, liquidity levels, are high enough to withstand that," Wilkins said. "And that's just because they are so, aside from being well capitalized and having liquidity, they are well diversified as well."

The Bank of Canada has raised interest rates twice since July to remove some stimulus, and said it would closely watch the impact of higher costs on consumers and the economy.