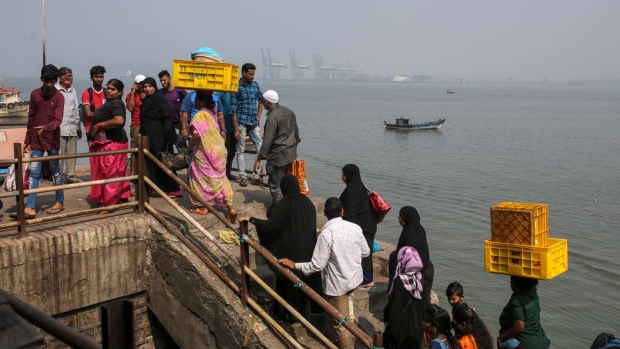 Passengers disembark from a boat as gantry cranes at the Jawaharlal Nehru Port in the distance in Navi Mumbai, Maharashtra, India, on Sunday, Nov. 14, 2021. Congestion at many of the world’s major ports offered a snapshot of supply chains trying to avoid unprecedented bottlenecks, as cargo handlers searched for the quickest way to route goods through the clogged arteries of global commerce. , Bloomberg

(Bloomberg) -- India may overshoot its budget deficit target as the government boosts spending and struggles to complete planned asset sales, according to people with knowledge of the matter.

The gap may widen to more than 7% of gross domestic product in the year through March 31 versus the 6.8% goal, the people said, asking not to be identified citing rules on speaking to the media. Lower divestment collections is also seen offsetting gains from higher tax collections, they added.

If the latter two had been met together, the shortfall could have been reined in to as little as 6.3% of GDP, Bloomberg News had reported in September. Since then, Prime Minister Narendra Modi’s government has announced it will spend $7.2 billion to offer poor citizens free food grains for another four months, and there has been little progress on mammoth asset sales that had been planned.

A finance ministry spokesman wasn’t immediately available for a comment.

It has raised 93.3 billion rupees from sale of stake in state-run firms, so far, in the current financial year. The government has a target of raising 1.75 trillion rupees this year but progress on plans to sell insurance behemoth Life Insurance Corp. or privatize oil refiner Bharat Petroleum Corp. have been slow.