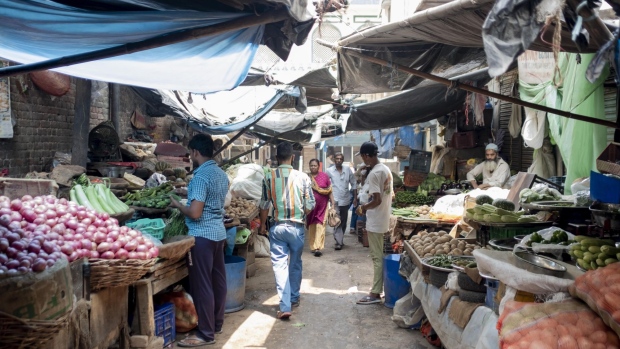 A vegetable market in New Delhi, India, on Wednesday, May 11, 2022. India’s central bank will raise its inflation forecast in the June monetary policy meeting amid elevated commodity prices, possibly setting the stage for more interest rate increases by August, a person familiar with the matter said. , Bloomberg

(Bloomberg) -- India’s consumer price inflation will overshoot the central bank’s target range this year to average around 7.5%, a former member of the monetary policy committee said, with the benchmark repo rate likely to rise as high as 6% by the end of the tightening cycle.

Mridul Saggar, who was in-charge of the monetary policy department as well as the research cell at the Reserve Bank of India until he retired late last month, said in an emailed interview it is almost certain that inflation will breach the upper tolerance level of 6% in each quarter this year. India’s financial year runs from April to March.

As a result, “monetary policy will have to confront inflation persistence and work hard to contain second-round effects with some growth sacrifice but without squelching growth,” he said.

The RBI targets inflation in the 2%-6% band and has forecast it to average at 5.7% in the fiscal year to March 2023. That is below economists’ forecasts for an average reading of 6.2% in a Bloomberg survey. If headline retail price inflation stays above 6% for three straight quarters, Indian laws require the RBI to write a letter to the government laying out the reasons for failing to meet its mandate as well as suggest remedial measures to bring prices under control.

On Monday, Governor Shaktikanta Das told a television channel that the RBI had gone back to the drawing board and was still working out the latest inflation forecasts. Those forecasts will be released in June along with the rate decision.

“It is a no brainer that RBI will have to revise its inflation forecasts upwards,” Saggar said.

“The quantum of revision will be closely watched. The fact that RBI projected an annual average inflation forecast of 4.5% at the time of February policy in some ways means that it needs to relook at its inflation forecasting exercises. Considering the misses in the recent times, it is not the models that need as much refinements as the assumptions that goes into it,” he added.

Here are some more excerpts from the interview: