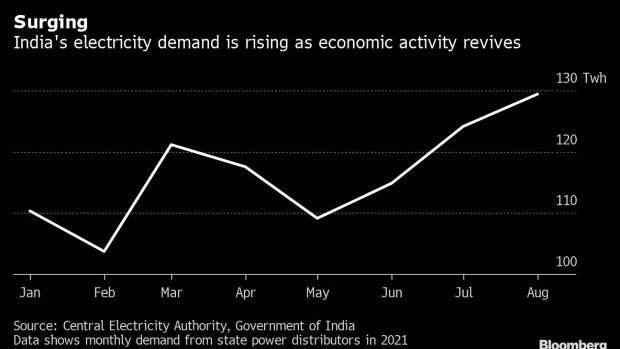 (Bloomberg) -- Coal stockpiles in India plunged to the lowest in nearly three years, putting more than half the country’s coal-fired generation capacity at risk of outages.

The fossil fuel produces nearly 70% of India’s electricity and the crisis has been aggravated by the high prices of overseas coal, which has led to some large power plants that burn mainly imported coal to idle much of their capacity to cut losses.

The dwindling supplies also come at a time when electricity consumption has been unusually strong, fueled by a revival in economic activity. Power use rose 10% in July and 18% in August, an unusual increase during these rainy months when construction activity slows and milder weather cools demand.

Coal stockpiles at power plants have declined 73% over the past year, leaving nearly 121 gigawatts of generation capacity with stockpiles of a week or less as on Sept. 21, according to government data.