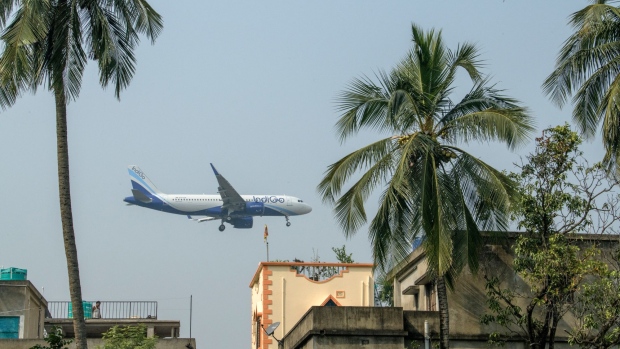 (Bloomberg) -- IndiGo is planning to fly another airline’s Boeing Co. larger jets as it tries to plug capacity gaps amid a surge in travel demand.

India’s biggest airline said in a statement Monday that it is working on finalizing a contract for inducting Boeing 777 aircraft on a so-called wet lease basis for the winter schedule. Wet leasing refers to the practice of leasing an aircraft, along with crew to fly the plane and provide service onboard.

IndiGo didn’t specify how many 777 jets would be involved or from what airline. A person familiar with the matter said India’s Directorate General of Civil Aviation had given IndiGo the green light to wet lease six 777s from Turkish Airlines for three months, with the ability to extend that arrangement.

The move comes after India’s Ministry of Civil Aviation ruled that Indian carriers can wet lease wide-body jets for as long as one year based on the international routes they intend to fly, up from six months previously.

Representatives from IndiGo declined to comment. A spokesperson for the Ministry of Civil Aviation didn’t immediately respond to a request for comment.

India’s government is pushing local carriers to expand their fleets of wide-body aircraft to better compete on international routes with the likes of Emirates and Etihad Airways PJSC, which dominate overseas travel to and from the nation through their hubs in Dubai and Abu Dhabi respectively.

For India, establishing aviation links with Turkey has been controversial in the past. Former Turkish Airlines Chairman Ilker Ayci earlier this year backed away from taking the chief executive role at Air India after facing political opposition considering Turkey’s strained relations with India.

IndiGo Chief Executive Officer Pieter Elbers has lamented the impact global supply chain disturbances have had on aircraft manufacturing, saying they’re hurting the airline’s ability to fully deploy capacity. IndiGo is looking at extending some of its existing leases and using wet leases to tackle the shortfall, he said on an earnings call earlier this month.