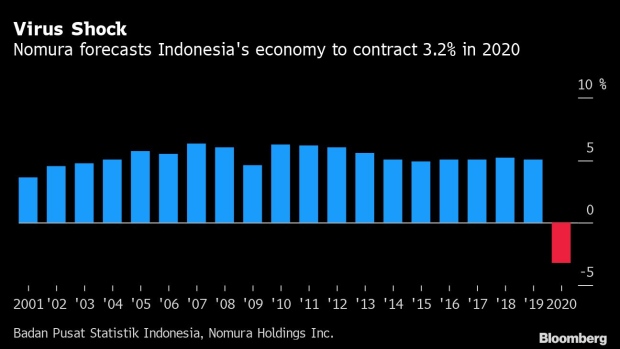 Indonesia is struggling to contain a surge in coronavirus cases in the world’s fourth-most populous nation, casting doubts on the likelihood of a V-shaped recovery for the economy.

For more than a month, hundreds of thousands soldiers and police have been busy enforcing social distancing rules to contain the outbreak in Indonesia. But new cases have continued to spike, more than doubling to over 55,000 since then. Evidence is also fast emerging of the wide spread of the virus outside the main Java island, the nation’s epicenter of commerce and industrial activities.

The spike in infections may prompt businesses to delay reopening and weigh even more on consumer sentiment, deepening a slump in Southeast Asia’s biggest economy and forcing the cash-strapped government to add to its stimulus measures.

Nomura Holdings Inc. is forecasting a 3.2% contraction in the economy, with the fiscal deficit ballooning to 7.5% of gross domestic product this year. That’s far worse than the government’s projection of growth in a range of -0.4% to 1% and a budget gap of 6.34%.

“The daily cases have worryingly continued to accelerate in recent days, suggesting the reopening may have increased the risk of transmission,” Euben Paracuelles and Rangga Cipta, economists at Nomura, wrote in a report last week. “W﻿e believe the increase in Covid-19 cases could hamper the recovery, as demand remains weak and consumer confidence is low.”

Indonesia didn’t impose a nationwide lockdown like many of its neighbors, and has already begun easing some of the restrictions put in place to contain the pandemic. Shopping malls, places of worship and restaurants were allowed to reopen from early June in the capital Jakarta and some other cities.

RHB Investment Bank, which forecasts a 1% contraction in GDP this year, says rising Covid-19 cases could force the government to maintain some form of restriction on movement, further suppressing growth. It could also prompt Bank Indonesia to continue its easing cycle by cutting interest rates by 25 to 50 basis points, depending on the severity of the crisis, economist Ahmad Nazmi Idrus said.

Indonesia’s virus strategy is muddled by a lack of uniform policy response across its disjointed islands and may warrant a long period to contain the pandemic, according to Panji Fortuna Hadisoemarto, an epidemiologist at Padjadjaran University in Bandung. More than two-thirds of the country had loose social distancing rules such as mandatory use of masks in public and working from home, and they haven’t been very effective, he said.

“We can no longer estimate the peak of the pandemic nationally because policies are different for each region,” Hadisoemarto said. “If we continue with this strategy, then we have to wait a very long time to get through this. It can be years.”

On a visit last week to Surabaya, the country’s second-largest city, President Joko Widodo set a two-week deadline to control the outbreak there. The region has become a hotspot, recording the highest fatalities among 34 provinces. Having earlier this month ended a partial lockdown in the city, Widodo reminded officials of the need to balance the health of the population with pressures to reopen the economy.

Finance Minister Sri Mulyani Indrawati expects the economy to recover in the third quarter after an estimated 3.8% contraction in the current one. Coordinating Minister for Economic Affairs Airlangga Hartarto has said the country is poised for a V-shaped rebound given its less punishing virus containment strategies.

The spike in new cases in recent weeks in East Java, South Sulawesi, South Kalimantan and Jakarta has prompted authorities to abandon forecasts of a June peak and rather focus on measures to stem its spread. Indonesia’s test ratio of 2,750 for every 1 million of the population is below that of Bangladesh and Sri Lanka.

With that kind of backdrop, the outlook for the economy is darkening.

“Given the uncertainties about the health situation in Indonesia, our baseline forecast assumes a more U-shaped profile for the economy’s recovery as opposed to a V-shape,” Sung Eun Jung, an economist at Oxford Economics Ltd. in Singapore, wrote in a report. “Even if consumers and businesses are allowed to move around and operate, they’ll be hesitant to do so if their health concerns persist.”