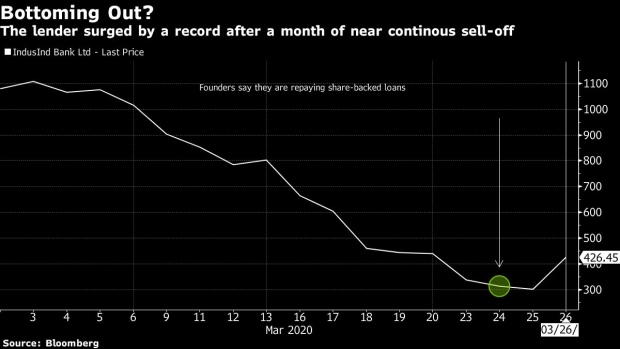 (Bloomberg) -- IndusInd Bank Ltd., backed by the billionaire Hinduja brothers, surged the most on record, as investors poured into the stock after its founders said they are repaying a loan backed by shares of the lender.

The shares jumped as much as 50%, the sharpest since the bank’s stock started trading in 1998, to 451.95 rupees as of 12:20 pm in Mumbai. The rally comes after a three-week slump during which IndusInd shares gave up two-thirds of their value.

Investors dumped shares of banks in general after the nation’s central bank effectively took control of troubled lender Yes Bank Ltd. on March 5. But as broad-based selling intensified amid the spread of coronavirus, IndusInd Bank fell more steeply than its peers on concerns about the founders borrowing money against its shares, worsening asset quality, and an erosion of low-cost deposits.

IndusInd founders, led by brothers Srichand Hinduja and Gopichand Hinduja, have already repaid about 80% of a secured loan, said a spokesman for IndusInd International Holdings Ltd., the controlling shareholder of IndusInd Bank, on Tuesday. The remaining amount will be settled in the next few days, according to the spokesman.

“We are quite surprised at the sharp sell-off in IndusInd Bank in the past month,” analysts at Kotak Institutional Equities led by M B Mahesh wrote in a note to clients. The fall had moved the bank’s valuation closer to its lowest point in two decades, and two standard deviations below its long-term average, according to the note.