Aluminum is heading for a seismic shift as a long-running supply glut starts to fade, setting the stage for shortages and a price rally that could run for years.

Demand is set to surge on the back of climate-change investment, and mega-producer China -- which accounts for more than half of global output -- is cracking down on smelting to reduce pollution and meet green targets.

Those combined forces mean the oversupply that’s dominated the market for more than a decade is on the way out, leaving buyers bracing for a new era of scarcity and higher costs. 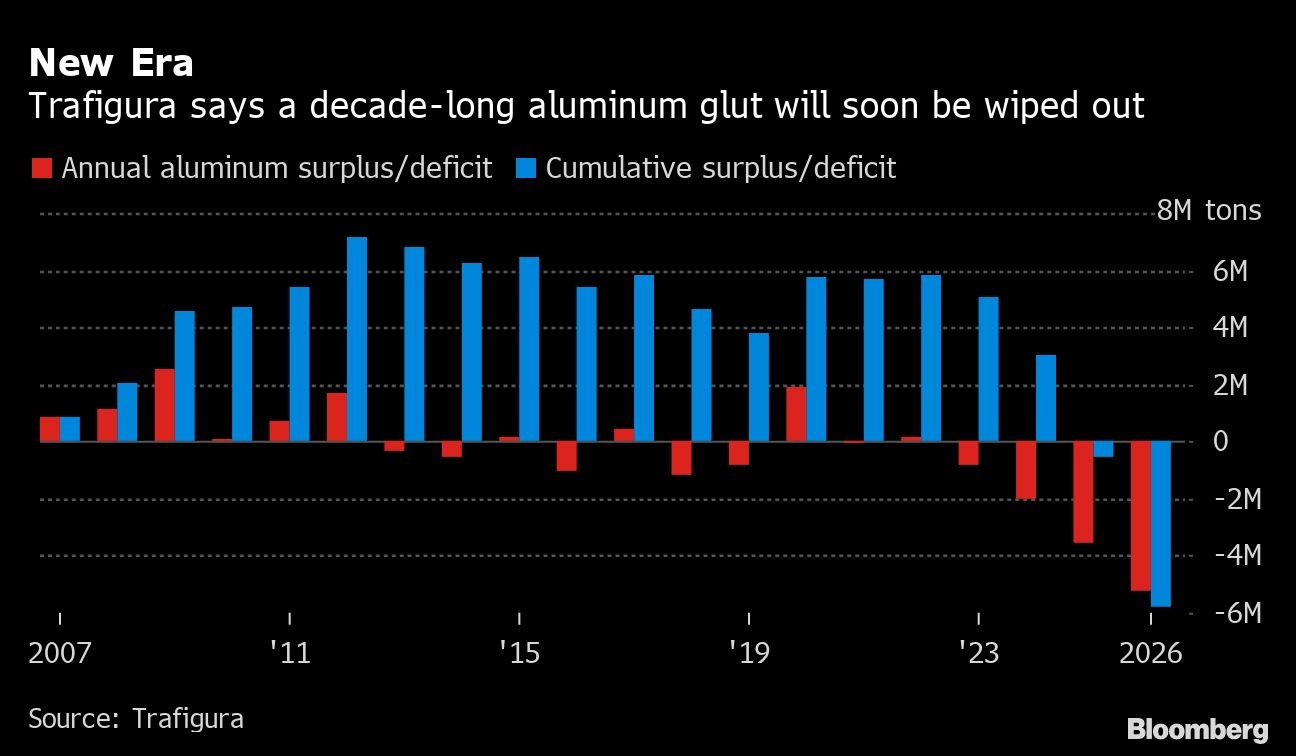 With aluminum a feature of everyday items, from food packaging and beer cans to iPhones and cars, what’s playing out in markets has implications for inflation and consumers’ pockets.

It’s already jumped 26 per cent this year to about US$2,500 a ton, one the best performers on the London Metal Exchange. Goldman Sachs Group Inc. is among those seeing more gains ahead, forecasting record prices above US$3,000 by late next year.

In the short term, the global economy’s post-pandemic rebound, and demand in the automotive and construction industries, are eating into inventories. But while in the past, supply kept pace with additional demand, that could change once China’s cuts kick in, leaving the market in a deep deficit by 2024, according to trading giant Trafigura Group.

“It takes quite a mindset change -- some viewed buying aluminum similar to buying groceries in the supermarket,” said Philippe Mueller, head of aluminum trading at Trafigura. “It’s not going to work like this anymore.”

The metal isn’t alone in facing short-term issues. The combination of soaring demand and spluttering supply after COVID-19 disruption has upended many raw materials markets, all of which is feeding the global inflation scare that’s taken hold in some corners this year. 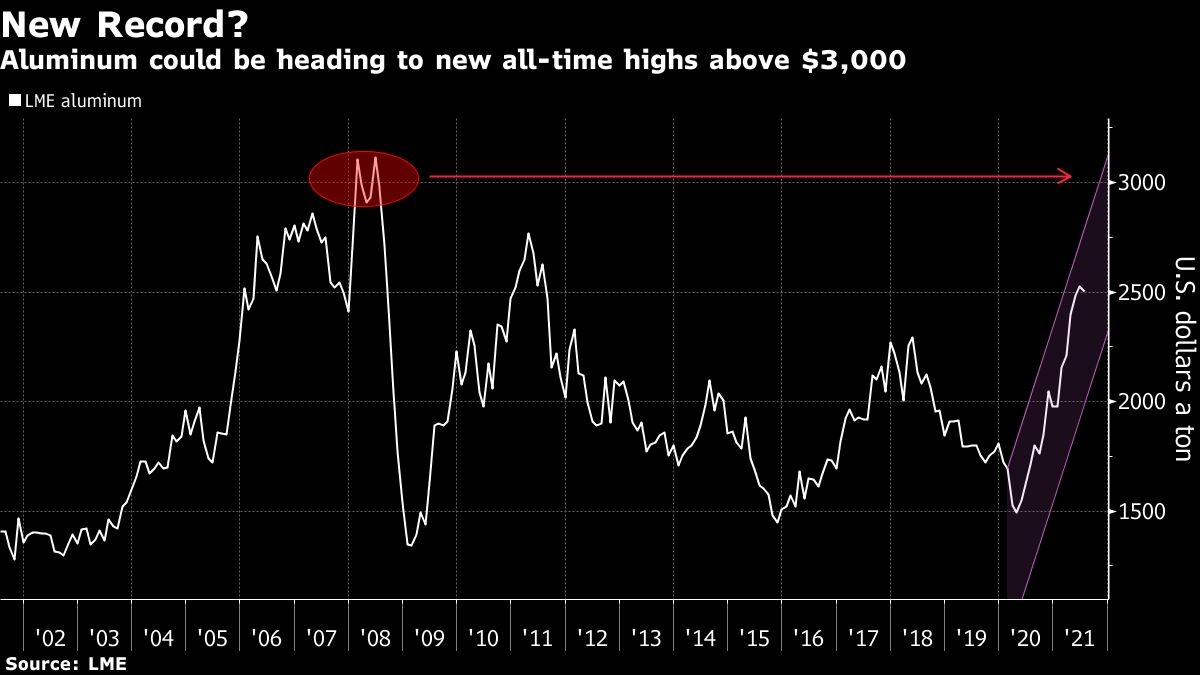 For aluminum, China’s actions are key. The government started cracking down in 2017, capping smelting capacity at 45 million tons a year, and its subsequent carbon emissions targets have dashed any expectations that policymakers might ease off on the sector.

“The government is serious this time,” Alison Li, co-head of base metals research at Mysteel, said by phone from Shanghai. “Now China has its carbon neutrality mission, we think they will stick to that limit.”

Actual production will reach about 40 million tons in China this year, so for now producers still have some room to boost output, according to Goldman Sachs. But the industry is likely to hit the ceiling by 2024, and from then on the Chinese market will move into deficit.

Producers elsewhere could help to plug the gap, but prices will need to rise substantially to make investment worthwhile, given higher costs for environmental compliance. Trafigura estimates aluminum needs to hit US$3,500 within the next year to prevent shortfalls, given the timelag to build new smelters.

Logistical bottlenecks, higher freight costs, as well as taxes and tariffs are also at play right now, wreaking havoc in the spot market. United Co. Rusal International PJSC, the biggest aluminum producer outside China, may curb shipments because of a new Russian levy on exports.

There’s been a staggering rise in the premiums that companies need to pay on top of LME prices to get hold of the metal, meaning buyers are already facing near-record all-in prices for specialized products like aluminum billet. 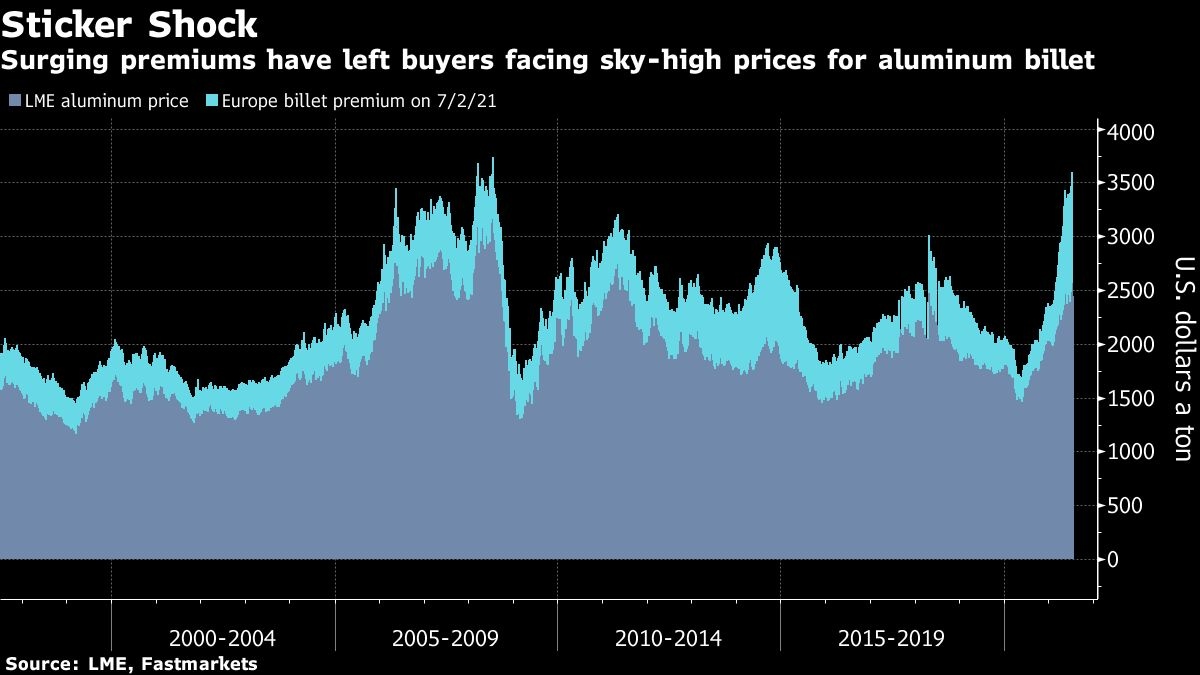 There’s even a shortage of aluminum cans thanks in part to the shift to dining at home during the pandemic. As a result, firms have been forced to import from East Asia and South America at a time when freight rates are soaring, adding to costs.

“The supply-chain complexity of bringing cans in from across the world is intense, not only from a cost perspective,” John Hayes, chief executive of can-maker Ball Corp., said on an earnings call in May.

For those counting on market dislocations proving temporary, lumber offers some hope. Having rallied to a record in May on the back of a U.S. homebuilding boom, prices are now fast tumbling back toward pre-pandemic levels.

But Rob Van Gils, CEO of Austria-based Hammerer Aluminum Industries, sees no let-up for aluminum yet, as customers snap up his specialist products even with near-record prices. Like many in the industry, Van Gils was forced to make deep cuts to headcount and output when the pandemic struck, but plants are now back at full capacity, and orders have never been so strong.

“The whole supply chain is very much stressed, from beginning to end,” Van Gils said by phone. “It’s created this situation where premiums have skyrocketed, because the availability is just not there.”

The surge in aluminum premiums could unravel quickly if end-consumer demand starts to drop away, and construction will be the key sector to watch, according to Van Gils.

But for now, sales are booming. Rising demand from the largely dormant aerospace sector, as well as the long-term environmental shifts, could yet lend further support when the post-COVID-19 demand boost starts to ebb in other areas.

“It’s a seller’s market out there,” said Mueller. “If you look at the next 10 years, we’re in a massive transition phase in the aluminium market.”