Intel Corp. plans to spend US$20 billion on a chipmaking hub on the outskirts of Columbus, Ohio, which the company expects to grow to be the world’s biggest semiconductor-manufacturing site.

The chipmaker will begin construction of two fabrication plants on a 1,000-acre site in the town of New Albany, which it expects to be operational by 2025, Intel said Friday. The plan will rely on the most advanced technologies and result in an increased American share of the global chip supply chain, the company said.

The project will be the largest single private-sector company investment ever in Ohio, according to the governor, and will generate more than 20,000 jobs in the state, including 3,000 direct Intel positions earning an average of US$135,000 a year, plus benefits.

For Intel, the move is a step toward regaining its manufacturing prowess, something the long-dominant processor maker has lost in recent years. Intel shares rose 1.9 per cent in New York on Friday morning.

Intel Chief Executive Officer Pat Gelsinger has been vocal about the need to build more chip factories in the U.S. and Europe, areas where manufacturing of the vital electronic components has declined precipitously. He’s argued that a rebalancing of production is needed to reverse the industry’s increasing concentration in East Asia.

Gelsinger has pointed to the pandemic-induced supply-chain crunch and increasing geopolitical tension between China and the U.S. as evidence that Western governments need to find cash to persuade chipmakers to relocate. 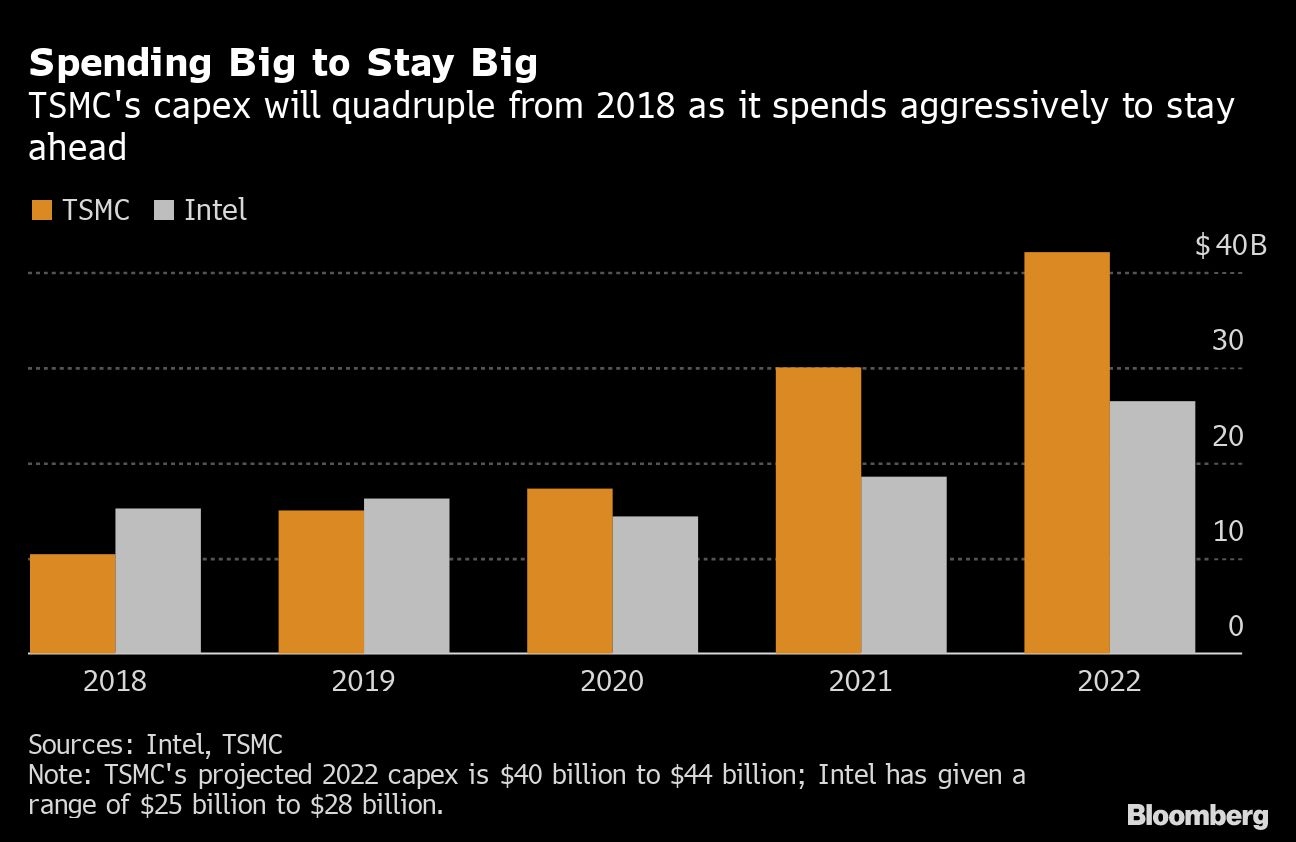 Intel is committing to building in Ohio using its own funds and hoping that the U.S. federal government will deliver on planned resources aimed at supporting an expansion of semiconductor manufacturing, Gelsinger said in an interview. Congress is currently considering funding of the CHIPs Act, a proposal to offer about US$50 billion in incentives to companies willing to locate chip production in the U.S.

“We are putting our chips on the table,” he said. A build-out of the new Ohio location “will go bigger and faster with the support of the CHIPs Act.”

The Biden administration and Congress have struggled for more than a year to ease a semiconductor shortage gripping a wide range of U.S. industries, with few tangible results for those efforts. Even as he’s taken a hit for all the broader supply-chain troubles across the economy, President Joe Biden has been slow to press for passage of legislation called the U.S. Innovation and Competition Act, which includes CHIPs. But he and other officials, including Commerce Secretary Gina Raimondo, have emphasized the overall need to boost domestic output.

“I want other cities and states to be able to make announcements like the one being made here today,” Biden said Friday at the White House, with Gelsinger by his side. “And that’s why I want to see Congress pass this bill right away and get it to my desk.”

Gelsinger said Intel chose the location from among 30 to 40 prospective sites. The state was competitive in the incentives and other support it’s willing to offer, he said. The availability of potential employees from local universities, military veterans and the relatively cheap cost of labor at a time of wage inflation were also factors, he said. State officials haven’t disclosed the incentives offered to Intel to land the project.

Adding Ohio to its list of locations -- an area not traditionally an area associated with the technology industry -- supports the greater geographical diversity that Gelsinger has championed. Intel is also looking at sites in Germany, Italy and France for new factories, test and assembly plants, and research and design centers, Bloomberg has reported.

Putting some of Intel’s billions of dollars in capital expenditure to work in a new location for the company -- it currently has plants in Oregon, Arizona and New Mexico -- may help bolster Gelsinger’s appeal for taxpayer money. That in turn will help cushion some of the drag on profitability caused by his ambitious plans to muscle in on the business of outsourced chipmaking, an area dominated by Taiwan Semiconductor Manufacturing Co. and Samsung Electronics Co. Gelsinger has called his approach the “IDM 2.0” strategy, building on Intel’s integrated device manufacturing model.

This year Intel’s CEO has budgeted a record amount of spending on new factories and equipment. But, highlighting the massive and growing cost of state-of-the-art chipmaking, TSMC and Samsung are planning to raise the stakes even higher.

TSMC has set aside more than US$40 billion for capital expenditures this year. That compares with Intel’s plan to spend up to US$28 billion. South Korea’s Samsung will likely announce its plans on Jan. 27 in its earnings release. Analysts, on average, predict a company wide budget of about US$36 billion.

“We continue to view Intel’s investment in U.S. production as a costly but necessary part of their IDM 2.0 strategy,” Wells Fargo & Co. analyst Aaron Rakers said in a note to clients. “We expect investors to be focused on the gross margin implications of what appears to be a significantly increasing capital intensity at Intel over the coming years.”

Intel’s gross margin, the percentage of sales remaining after deducting the cost of production, has narrowed to well below the 60 per cent level that it had delivered for years, an indication of its former dominance of the industry. Gelsinger has said that’s because the company is in “investment mode” and he predicted that the indicator would expand again when the chipmaker returns to technology leadership.