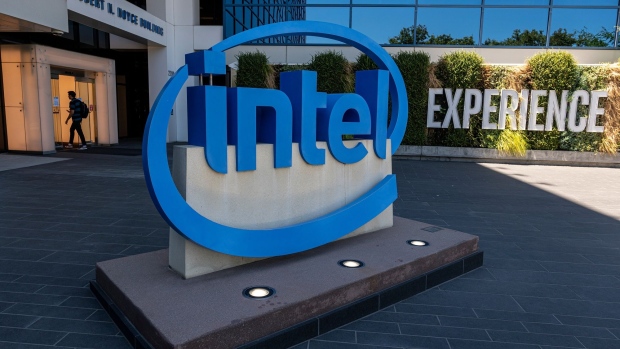 (Bloomberg) -- Intel Corp. shares climbed in late trading after the chipmaker pledged to slash costs, an effort to weather a persistent slump in computer demand that is dragging down sales and profit and obstructing its turnaround efforts.

The company said actions including headcount reductions and slower spending on new plants will result in savings of $3 billion next year, with annual cuts swelling to much as $10 billion by the end of 2025. Third-quarter profit and revenue tumbled, Intel said Thursday in a statement, and it again scaled back 2022 revenue and profit targets.

Chief Executive Officer Pat Gelsinger had been banking on a rapid rebound in semiconductor sales to help fund his ambitious plans to restore Intel to its former dominance in the $580 billion industry. Gelsinger, who predicted three months ago that the third quarter would be the nadir for the company’s performance, instead said that demand for Intel’s computer processors has fallen off even more sharply than projected and the outlook remains dour.

“The worsening macro was the story and is the story,” Gelsinger said in an interview. “There’s no good economic news.” Predicting a bottom for the market for computer chips currently would be “too presumptive,” he said.

Intel shares initially fell, then rose about 5.4% in late trading following the announcement. Earlier, they closed at $26.27. The stock has plummeted 49% this year.

Earlier this month, Bloomberg News reported that Intel was planning a major reduction in headcount, likely numbering in the thousands, according to people with knowledge of the situation. Some divisions, including Intel’s sales and marketing group, could see cuts affecting about 20% of staff, according to the people. In its earnings report Thursday, the company didn’t specify how many jobs would be eliminated.

Fourth-quarter revenue will be about $14 billion to $15 billion, the company said, compared with analyst estimates for $16.3 billion. Profit, excluding certain items, will be 20 cents a share, below the average prediction of 66 cents.

For the year, Intel reduced its revenue forecast to $63 billion to $64 billion, a decline of as much as 20% from 2021. Gross margin will narrow further than earlier anticipated to 47.5%, and earnings per share will be about $1.95.

Gelsinger said that level of profitability isn’t good enough, and is partially a result of inefficiencies in Intel’s operations that need to be addressed. The company’s plants, once the industry leader, will be forced to report their utilization rates, and chip designers will have to improve at getting the blueprints they send to those facilities right the first time. Intel’s rivals use fewer people to get better results, he said.

One bright spot in Gelsinger’s plans to reshape the company came earlier this week, when Intel’s self-driving technology unit, Mobileye Global Inc., began publicly trading in a partial spinoff. Its shares surged 38% in their market debut Wednesday. Intel retains control of the division, which raised $861 million in the share sale. Gelsinger has said Mobileye may serve as a template for other such transactions that will help Intel capitalize on the value of some of its assets.

Third-quarter sales for Intel’s data-center division -- which typically contributes an outsized portion of profit –- dropped 27% to $4.2 billion, lower than the average analyst estimate of $4.83 billion. Client computing, Intel’s PC-chip unit, reported a sales decline of 17% to $8.1 billion, compared with projections for $7.78 billion. The unit picked up market share, Gelsinger said.

A collapse in consumer gadget-buying has spread into corporate spending amid concern that the global economy is heading toward a recession. That has confounded predictions by chip-industry leaders that the boom of the past two years could endure, driven by the proliferation of semiconductor use into more types of devices. Computer and smartphone demand remains the primary influence on the fortunes of the broader chip industry, which expanded by more than $100 billion last year and some predicted would rapidly double to become a $1 trillion business.

Many of Intel’s largest rivals have posted downbeat reports or warnings about the outlook for computer components, falling billions short of estimates or slashing their predictions. While periodic slumps are not unusual for the chip business, analysts are concerned that the current decline is driven more by a contraction of the economy than a buildup of excess inventory that would have the potential to clear out quickly.

(Updates with comments from CEO starting in third paragraph.)