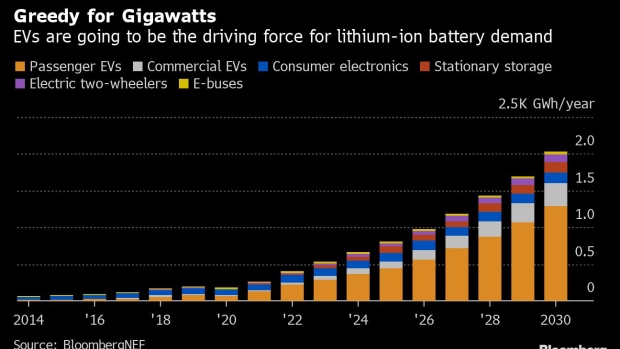 (Bloomberg) -- Investors are betting big on a lithium comeback less than three years after prices of the metal used in rechargeable batteries collapsed from a record and sent miners reeling.

Producers of the metal that had been shunned amid supply overhangs and plateauing demand raised almost $3.4 billion in equity offerings in the Americas so far this year, data compiled by Bloomberg show. That’s seven times the total amount raised from 2018 to 2020, when the industry was in a downturn.

Interest in the industry is resurgent as electric-vehicle targets set by global automakers and a change in the U.S. administration signal that a battery boom is finally gathering momentum. After the punishing three-year sell-off, prices of the soft silvery-white metal have started to rebound, and analysts including those at BloombergNEF expect further gains on rising demand and tight supplies of battery-grade lithium.

Talks with investors and discussions on potential supply agreements with automotive-equipment and battery manufacturers “which were only in my dreams a year ago are now filling my calendar,” Robert Mintak, chief executive officer of Vancouver-based Standard Lithium Ltd., said by phone.

A lithium price index compiled by Benchmark Mineral Intelligence jumped 32% this year through February, after plunging 59% from mid-2018 to mid-2020. The metal reached an all-time high in May 2018.

The investor pool “is expanded to technology investors and others,” said Mintak, as major automakers’ determination to deploy hundreds of billions of dollars to electrify their fleets gives investors “that safety that there’s going to be a supply pinch.”

The majority of the financing has been done by the world’s top two lithium miners -- Albemarle Corp. and SQM, or Soc. Quimica & Minera de Chile SA, as it’s known formally -- as they took advantage of their recent stock surges. Albemarle completed a larger-than-planned equity offering of $1.5 billion in early February, while Santiago-based SQM raised $1.1 billion in January.

Junior miners, most of which have yet to produce substantial amount of lithium, are also attracting strong interest from investors. Take the case of Standard Lithium, which opened its first direct lithium extraction plant in El Dorado, Arkansas, in September, with the facility using a new technology that allows for a 90% lithium recovery rate. It raised C$34.53 million ($27.6 million) in an over-subscribed share offering in December. Investor interest was so strong that it had to turn away offers for more, said CEO Mintak.

Lithium Americas Corp., which is developing the Thacker Pass mine in Nevada, raised a total of $500 million through two primary share offerings in October and January, respectively.

“The tide is finally turning, and much faster than I thought,” Chris Berry, president of House Mountain Partners, an industry consultant. “You see that with Lithium Americas being able to raise a total of half a billion dollars recently. This is for a pre-revenue company regarding lithium.”

Sigma Lithium Resources Corp., which is developing a hard-rock lithium project in Brazil, had to upsize its private placement and increase offering price, which “says a lot about investor demand for lithium exposure, that asset, and that company’s vision,” said Berry.

Ford Motor Co. announced last month that its passenger-vehicle range will be all-electric in Europe by 2030. General Motors Co. plans to sell only zero-emission models by 2035. Volkswagen AG went further, announcing plans this week to build six battery factories in Europe and invest globally in charging stations, as ensuring scaling battery production has become a key in the EV race.

Batteries make up about 30% of an electric car’s cost. And automakers around the world look to pivot to EVs, with hopes to get batteries at the cheapest price possible but also secure enough supply to meet those ambitions.

Meanwhile, U.S. President Joe Biden has pledged to build back the economy after the devastation of Covid-19 with cleaner energy and a lower carbon footprint. The administration said in late February it would conduct a government review of U.S. supply chains to seek to end the country’s reliance on China and other adversaries for crucial goods.

The election of Biden is “a very favorable signal to investors” as it boosted confidence that the switch to clean energy will accelerate, which along with existing favorable subsidies and regulations in Europe and China bodes well for raw materials needed for that energy transition, said Seth Goldstein, an analyst at Morningstar Inc. The U.S. is the second-largest EV market, after China.

Andrew Bowering, a director at Vancouver-based American Lithium Corp., called the U.S. review on supply chains “huge” for the lithium industry as it shows the government’s realization that in order to meet clean-energy goals, it’s important for the U.S. to have a security of supply of raw materials such as lithium.

“All of a sudden, after three years of downturn, you’ve got the price of the commodity starting to go up again and a change in the administration in the U.S. that’s pushing a green new deal and support big money going into the green automobile industry,” said Bowering. “That leads investors into the space.”