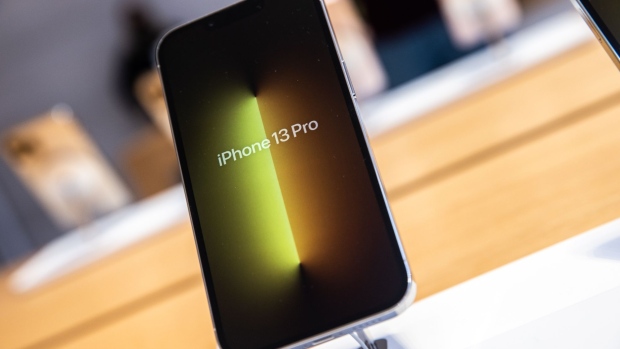 An Apple iPhone 13 Pro smartphone for sale at a store in New York, U.S., on Friday, Sept. 24, 2021. Apple Inc. is releasing its iPhone 13 lineup, testing whether new camera technology and aggressive carrier deals will get shoppers to snap up a modest update of last years model. Photographer: Jeenah Moon/Bloomberg , Bloomberg

(Bloomberg) -- iPhone assembly operations in China are beginning to reduce their energy consumption because of a sudden power crunch in the country, which has triggered government-imposed curbs on a range of businesses.

Pegatron Corp., a key partner for Apple Inc. and one of the assemblers of its iPhone, said on Monday that it’s taking energy-saving measures to comply with local government policies. Still, the firms responsible for producing the Apple handset have avoided drastic cutbacks in production so far and appear to be getting preferential access to energy in order to keep operations going, according to people familiar with the situation.

Pegatron’s iPhone facility in the eastern city of Kunshan will be only modestly affected, two of the people said, asking not to be named because the information is not public. There’s been no major impact on a nearby Luxshare Precision Industry Co. iPhone assembly unit, and the company continues to ready key products for shipment in line with its original schedule, one of the people said.

Curbs on industrial energy use have been imposed across several provinces, including economic powerhouses Jiangsu and Guangdong, as Chinese officials pursue President Xi Jinping’s carbon-neutral push and react to escalating coal and gas prices. The continued operations of Apple suppliers suggest Beijing may be excepting the advanced manufacturing sector from its power sanctions.

“Pegatron has been adopting energy- and water-saving measures over the past few years and there is a comprehensive response program for the current situation to reduce the impact on our operations and production capacity,” the company said in a texted statement.

While the iPhone supply chain appears resilient for now, executives at major Apple suppliers are closely monitoring developments, according to the people. Foxconn and Luxshare representatives did not respond to requests for comment and an Apple spokesperson did not immediately respond.

Exports remain a key growth driver for China, with Foxconn and other tech hardware manufacturers being the country’s top exporters and among its biggest employers.