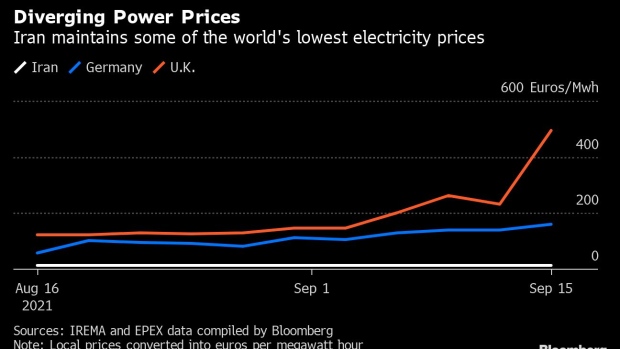 Spectators watch an illumination on the Azadi tower designed to show solidarity with the global fight against coronavirus in Tehran. Photographer: Ali Mohammadi/Bloomberg , Bloomberg

While European electricity prices spiked over the last month, shutting down energy-intensive industries and raising the risk of blackouts, the Persian Gulf country’s power prices dropped.

The Iran Electricity Market said on its website that the average price for a megawatt-hour of power on Thursday was the equivalent of 12.45 euros ($14.65), or about 40 times below the daily average for the U.K. and less than 10% of the cost in Germany, according to spot prices on the European Power Exchange.

Iran, with the world’s No. 2 gas and No. 4 oil reserves, has traditionally maintained some of the world’s lowest electricity prices. It trades power across grids that connect it to seven neighboring countries, as well as markets in Uzbekistan and Kazakhstan.

Even as the Islamic Republic’s economy has labored under U.S. sanctions over the last three years, it’s been expanding power- and gas-dependent industries. Steel production in the first eight months of the year grew at a faster pace than in China, making Iran the 10th-biggest producer of the metal. The high volumes of electricity needed to run centrifuges used to make nuclear fuel have also flown unimpeded.