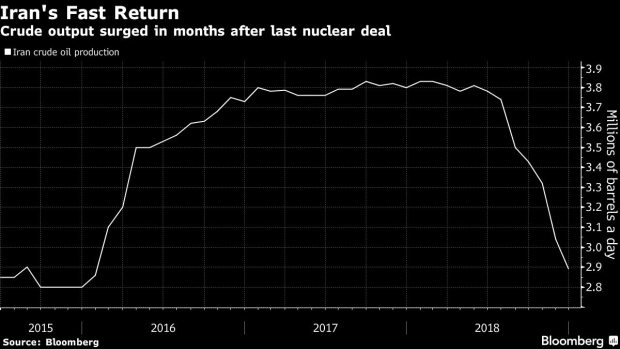 (Bloomberg) -- Iran is shifting more oil onto ships in a move to speed exports should talks succeed in ending its exclusion from global energy markets.

The amount of oil on tankers has jumped by 30 million barrels since early December to 103 million barrels, according to analysis firm Kpler. The increase comes as diplomats in Vienna work on a deal to limit Iran’s nuclear program in return for easing sanctions that have kept it from selling most of its crude.

While the Persian Gulf country will need a few months to ramp up fields that have under-produced for more than three years, it could start selling oil from storage almost immediately once sanctions are relaxed. The increased flows may help to temper crude prices, which have soared more than 20% this year to almost $100 a barrel.

“Additional barrels will, of course, put some downward pressure on prices,” said Carole Nakhle, chief executive officer of consultants Crystol Energy. Still, “the effect of releasing oil from storage is minor compared to the potential increase in production” that will come as Iran brings fields back into service.

Within months of a deal, Iran could restore about 1 million barrels a day of supply to global markets, Vitol Group CEO Russell Hardy said in a Bloomberg Television interview this week. That would help make up for a shortfall from other OPEC+ producers, many of which are suffering from under-investment and output disruptions.

The original 2015 landmark accord that restrained Iran’s nuclear work in exchange for sanctions relief led to a surge in production, which then tumbled after the U.S. pulled out of the deal in 2018.

Once OPEC’s No. 2 producer, Iran has slipped to fifth place, pumping about 2.4 million barrels a day on average in the past year, data compiled by Bloomberg show. Almost all of that oil is used domestically, instead of exported.

Read more: Iranian Oil Is What Might Save American Motorists: Julian Lee

About half the Iranian oil stored on tankers is crude and the rest condensate, a light oil that’s pumped from gas fields, Kpler said. The growth in floating storage has come mainly from moving oil out of onshore tanks, mostly at the crude-loading terminal on Kharg Island in the Persian Gulf, the firm said.

Kpler uses methods such as satellite tracking and data analytics to monitor vessels and follow cargoes and loadings.