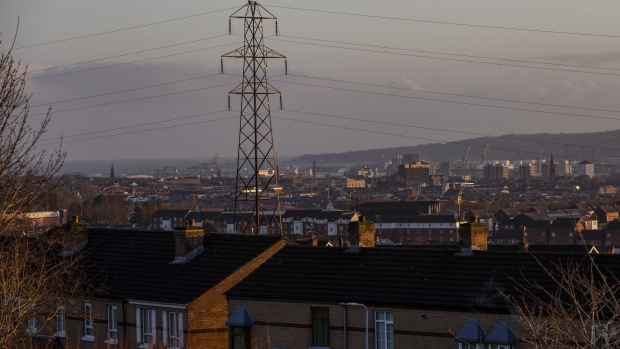 Electrical power lines hang from a transmission pylon among houses looking towards Belfast Harbour in Belfast, Northern Ireland, U.K., on Friday, Jan. 3, 2020. With the U.K. due to leave the European Union, questions remain over trading agreements and Ireland's 12-year-old single electricity market, known as the SEM. , Bloomberg

(Bloomberg) -- Companies in Ireland will receive help with their energy bills in an early budget to be announced Tuesday, amid a raft of measures aimed at tackling the cost-of-living crisis.

Ireland’s fiscal plan for the following year is normally announced in October but was brought forward amid a worsening economic environment. In addition to the 6.7 billion euro ($6.4 billion) plan set out in the summer, the government will announce a cost-of-living package of one-off supports to be paid before the end of 2022. These will aim to alleviate pressure on households as well as to protect jobs by helping small and medium-sized businesses, Prime Minister Micheal Martin said in an interview last week.

Longer-term plans reported to be considered include raising the threshold for the top level of income tax from 36,800 euros to 40,000.

“If the arithmetic is as it suggests then this budget is going to spend significantly more than any recent budget,” said Kevin McLoughlin, head of tax at EY Ireland. “The significance of the amounts involved in terms of both tax and other measures cannot be understated.”

Expectations are high, coming as the government presides over a fiscal surplus, largely fueled by record tax receipts from corporations. The state expects to record a surplus of more than 4.4 billion euros in 2022 and potentially close to 12 billion in 2023 before budget commitments are made, according to a White Paper published by the Department of Finance over the weekend.

Even so, the government has indicated it intends to maintain a reserve in order to tackle further economic challenges.

“We will not empty the tank now,” Deputy Prime Minister  Leo Varadkar said in Dublin last week. “We will keep resources in reserve so that we can respond as the situation develops and intervene again if we need to, if this crisis persists.”

Calls for energy price caps or a windfall tax on energy firms are also likely to be disappointed, as the government awaits a directive on a European Union level, according to McLoughlin.

Ireland is not alone in trying to help households and businesses amid an energy and cost-of-living crisis. The French government on Monday announced extra spending plans to cushion energy price shocks, while the UK last week unleashed a series of tax cuts.

Still, Tuesday’s statement is likely to strike a different tone from economic statements elsewhere in Europe.

“The major feature of this support is going to be temporary in nature -- temporary and targeted,” Goodbody Stockbrokers Unlimited Chief Economist Dermot O’Leary said. Unlike the UK, there aren’t going to be ideological changes in terms of taxing and spending, he said. “We’ve been a bit lucky relative to other countries to have this corporate tax windfall and it would be right to use that solely on temporary spending measures to do with the cost of living crisis at this point in time.”