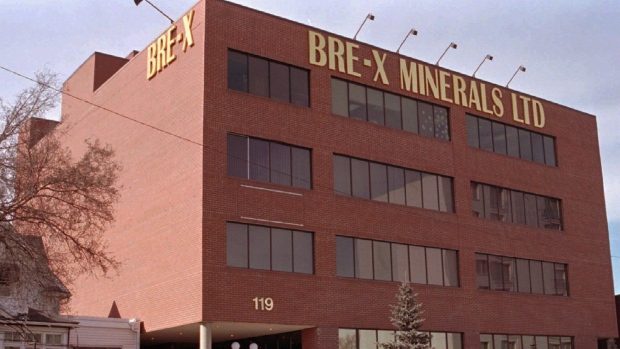 The former office of Bre-x Minerals Ltd. in Calgary , The Canadian Press

I was at one of the nicer restaurants in downtown Toronto, just beginning a get-to-know-you lunch with an executive of a large Canadian mining company. We talked about metals markets, the company’s growth strategy and his recent move from one company to another. With white linen napkins on our laps, we began eating.

Then a waiter approached the table. He had a telephone in his hand, and said there was a call for me.

It was my editor, back at the Financial Post newsroom, about four blocks away on King Street West.

And run I did, leaving my somewhat flustered guest to finish his grilled salmon alone. The Bre-X story had just exploded.

Not that it hadn’t already been a wild ride up to that point. Bre-X Minerals was a Calgary-based junior gold company with a deposit in Indonesia that had become an obsession among Canadian stock market investors. Drill results indicated the deposit was rich, big and getting bigger. Each time Bre-X issued new results, the stock would lunge upward again.

Bre-X’s Busang deposit, investors believed, was going to be the most lucrative gold mine in history, and it was already making people rich. Take David Walsh and John Felderhof, for instance. Walsh, the CEO, and Felderhof, the top geologist, had decided to reward themselves for their hard work on behalf of shareholders by cashing in stock options and each buy a sprawling home in the Cayman Islands.

The biggest gold mining companies in Canada – Barrick Gold and Placer Dome - battled each other for the right to own the deposit, only to be bested by a company based in the U.S. deep south. Busang was big and getting bigger.

Then Michael de Guzman fell out of a helicopter.

De Guzman was Bre-X’s top on-site geologist. Working for Felderhof, he was in charge of supervising the drill samples and “assay” ore testing – and reporting the numbers back to head office in Calgary. How on earth did he suddenly fall out of a helicopter to his death?

Doubt had already begun to creep into the Bre-X story. The results were too good to be true, early sceptics said. Short sellers and day traders moved in, looking for quick profits.

Was it possible that de Guzman’s bizarre death, confirmed much later as a suicide, was a sign that this was all just a big con? A top Bay Street gold analyst snarled that those claims were “preposterous.”

(The story took yet another weird turn when Indonesian authorities reported they could not locate de Guzman’s body, and speculated the corpse may have been consumed by “wild pigs.”)

A respected Canadian consulting geologist was called in to eyeball the Bre-X ore samples himself. Every stock market watcher in Canada waited keenly for news of his findings.

Each day, I desperately worked the phones, trying to get  a handle on what people thought was really going on. Calls poured into my desk. “You have seventeen voice-messages,” my voice-mail system told me one afternoon, after I had been out of the office for an hour. People wanted to know what the latest news was – or they wanted to influence my reporting in a way that might support whatever position they had taken lately in Bre-X shares.

I flew down to New Orleans, to attend the annual general meeting of Freeport-McMoRan, the big copper miner that had beaten Barrick and Placer in that bidding war. (To no avail – reporters were not even allowed in the room in which the meeting was held, and charismatic Freeport CEO Jim Bob Moffett didn’t utter a word about Bre-X.)

It had been Freeport’s earlier statement that its analysis of the Busang ore samples had shown “insignificant amounts of gold” that had sent me running down that sidewalk.

Another FP reporter was dispatched to Indonesia, where he went head-to-head with The Globe And Mail’s reporter on the story. At Bre-X’s lab site in the Indonesian jungle, a sign warned “Stay Away”.

In time, the full details emerged. The independent geologist confirmed what Freeport had said earlier – there was no gold at Busang. It was a fraud.

De Guzman had indeed tampered with the ore samples. Hundreds of millions of dollars of investors’ money had evaporated. Years of lawsuits and regulatory hearings ensued. (One case, involving the conduct of a lawyer who represented Felderhof is still active to this day.)  Analysts angrily defended themselves against allegations (justified, in some cases) that they had acted as Bre-X cheerleaders.

What’s striking to this day, is how crude it all was. De Guzman had simply taken tiny grains of gold – first from his own wedding ring, and then from small nuggets found in rivers - and threw them into containers of barren crushed rock.

No one went to jail. No one was convicted of insider trading. Not one class action lawsuit produced a cent for investors who had lost huge sums.

Walsh died years ago.  And Felderhof runs a short-order restaurant in the Philippines.

The most positive outcome? Much tighter regulations on the handling, testing and reporting of mineral samples that have, thus far, helped prevent another Bre-X.