Every August, investors around the world obsess over what’s going on in a tiny Wyoming resort on the edge of the magnificent Teton mountain range. They have good reason to do so.

Over the past two decades, central bankers have used the Federal Reserve Bank of Kansas City’s annual symposium in Jackson Hole to plot out and signal changes in monetary policy.

With global recession fears growing and bond yields tumbling, this week’s gathering is one of the most anticipated in years.

Fed watchers expect Chairman Jerome Powell to suggest that the central bank is ready to reduce interest rates further when he delivers the opening address to the conference on Friday. 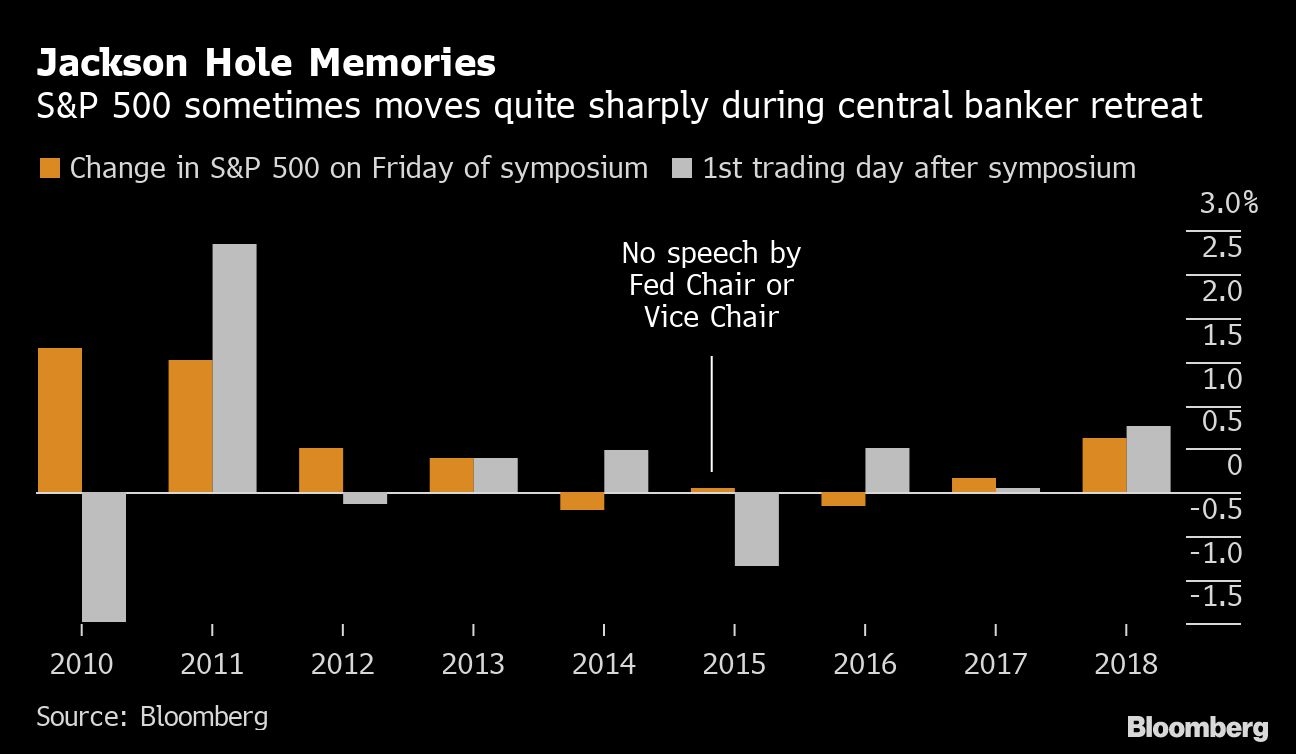 Here are some highlights from recent gatherings of the central bank clan in Wyoming:

European Central Bank President Mario Draghi laid the groundwork for quantitative easing in his address, warning that inflation expectations had deteriorated and assuring his audience the ECB “will use all the available instruments needed to ensure price stability.” The ECB launched QE the following year and bought over 2.6 trillion euros of mostly government bonds.

Fed Chairman Ben Bernanke signaled a third round of quantitative easing was on the table in his speech at Jackson Hole at which he defended the effectiveness of the Fed’s controversial bond purchases. Calling the costs of unconventional polices “manageable,” he said officials should not rule out their future use. The Fed launched QE3 the next month.

As the financial crisis raged, Bernanke frequently left the formal conference proceedings to discuss market developments with key lieutenants, including Fed Vice Chairman Donald Kohn and New York Fed President and later Treasury Secretary Timothy Geithner. “We tried to remain inconspicuous by leaving the conference at different times,” Bernanke recalled in his 2015 memoir of the period.

In his opening speech, Bernanke put an interest rate cut squarely on the table by recounting the toll that the slumping house market had taken on the economy and by stressing the importance of “well-functioning financial markets.” The central bank slashed rates by a half percentage point the following month, the first in a series that eventually lowered the Fed’s target to near zero.

In a symposium mainly given over to extolling the record of departing Chairman Alan Greenspan, University of Chicago economist Raghuram Rajan warned about excessive risk-taking by asset managers seeking to boost their compensation. Former Treasury Secretary Lawrence Summers sharply criticized Rajan’s paper for its “slightly Luddite premise.” But Rajan, who went on to become governor of India’s central bank, proved to be prescient as financial markets were engulfed by turmoil a few years later.

Then-Princeton University professor Bernanke and Mark Gertler of New York University made the case for the Fed pursuing a strategy of “flexible inflation targeting,” arguing that such an approach could achieve both macroeconomic and financial stability. In the event, the Fed did adopt a two per cent inflation target in 2012, after Bernanke became chairman.

--With assistance from Zoe Schneeweiss