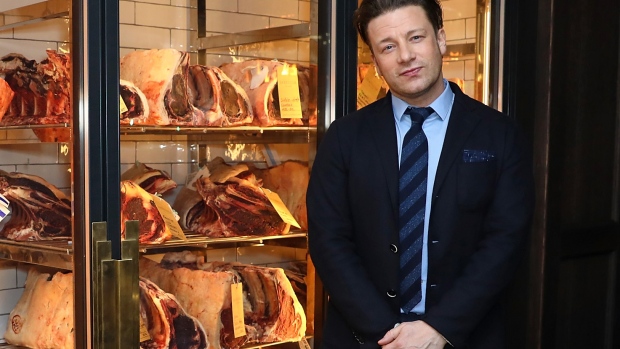 Jamie Oliver at the opening of restaurant in London. , Dave Benett/Getty Images

Jamie Oliver’s U.K. restaurant business collapsed into insolvency, leaving more than 1,000 jobs at risk after the celebrity chef failed to turn around the performance of his eateries.

Accounting firm KPMG has been appointed to oversee the immediate closure of 22 of the “Naked Chef” star’s Jamie’s Italian, Fifteen London and Barbecoa restaurants in the U.K. The procedures do not affect Jamie Oliver’s international business.

The group operates 25 U.K. restaurants and all but three have immediately closed, resulting in 1,000 lost jobs. The three remaining restaurants at London Gatwick Airport, employing about 300 workers, will remain open for a short while to allow KPMG to explore options for the sites.

Oliver has tried to revive his restaurant business for the past few years amid a tough consumer market, intense competition and rising costs. Last year the chef, who has built up a large television following, completed a company voluntary arrangement of his Jamie’s Italian brand. Such a procedure allows a business to cut shops and slash rents, but that was not enough.

“I am deeply saddened by this outcome and would like to thank all of the staff and our suppliers who have put their hearts and souls into this business for over a decade,” Oliver said in a statement.

I’m devastated that our much-loved UK restaurants have gone into administration. I am deeply saddened by this outcome and would like to thank all of the people who have put their hearts and souls into this business over the years. Jamie Oliver

Oliver’s restaurants are the latest victims of a shakeout that’s spread to Britain’s casual-dining business after hitting the likes of Applebee’s, TGI Friday’s and Ruby Tuesday in the U.S. U.K. chains such as Byron Hamburgers, Gaucho, Carluccio’s, Prezzo and Strada have all restructured over the past few years.

“The current trading environment for companies across the casual dining sector is as tough as I’ve ever seen,” said Will Wright, partner at KPMG and joint administrator.

News of the administration was first reported by Sky News.