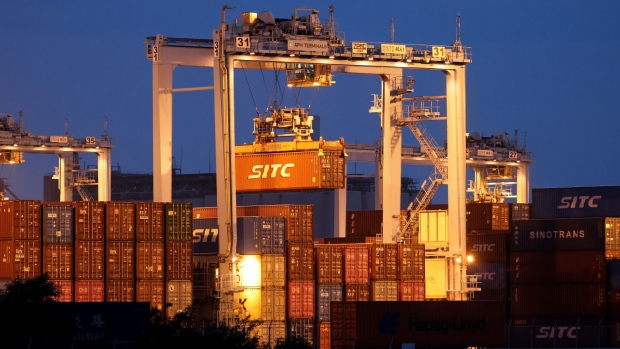 A transfer crane moves a container at a shipping terminal at dusk in Yokohama, Japan, on Monday, July 18, 2022. Japan is scheduled to release trade balance figures on July 21. Photographer: Kiyoshi Ota/Bloomberg , Bloomberg

(Bloomberg) -- Japan’s government cut its monthly economic assessment in January for the first time in 11 months, as trade weakened due to a global economic slowdown.

The Cabinet Office said in its latest report Wednesday that parts of the economy are showing weakness, while overall it’s picking up moderately. It downgraded its view of exports, imports and bankruptcies.

Japan is bracing for the impact of a global economic slowdown from aggressive monetary policy tightening, and the fallout from China’s abrupt end to its zero-Covid policy.

Inflation in Japan is running at the fastest pace in more than four decades, which has contributed to a rise in the number of bankruptcies as companies struggle to pass on costs to customers.

The latest government stimulus measures, worth 39 trillion yen ($300 billion) in fiscal spending, are expected to start easing the pain early this year. Still, analysts surveyed by Bloomberg forecast growth will slow down in the first quarter of this year.