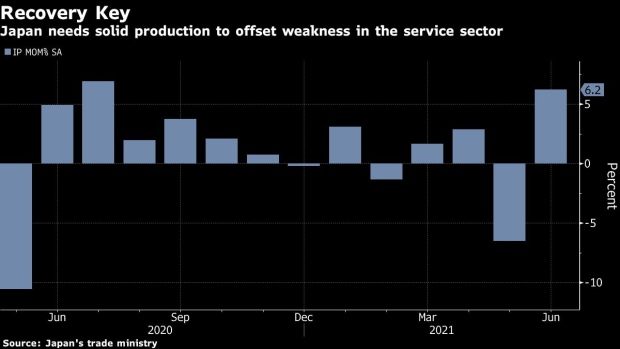 Japan’s factory output and retail sales climbed in June, suggesting the economy was starting to regain a more solid footing before the record explosion of virus cases in recent days.

A rebound in auto production helped industrial output gain 6.2% from May, while retail sales rose 3.1%, the economy ministry reported Friday. Both figures exceeded the median estimates from analysts.

Separate reports also showed improvement in the labor market, with the unemployment rate ticking down and job offers exceeding seekers by a slightly wider margin.

Improved production and retail receipts at the end of the second quarter supports a view that Japan’s economy is likely to have returned to growth in the period, although a resurgence of virus cases after June’s lull could push back the timetable for a more robust recovery.

Japan on Thursday found a record of more than than 10,000 new virus cases. Economy Minister Yasutoshi Nishimura on Friday said he wants to extend a virus emergency in Tokyo to the end of August and bring surrounding areas and Osaka under similar measures.

“The stronger-than-expected rebound in June industrial production cemented a solid rise in the second quarter -- helping support an economy that struggled from virus-containment measures. The pickup was spurred mainly by external demand.”