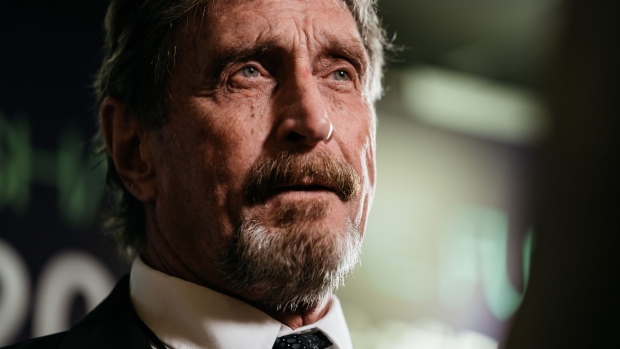 McAfee, who decades ago founded the anti-virus company that bears his name, was found dead in his cell just hours after Spanish courts approved his extradition to the U.S. to face charges of tax evasion. U.S. prosecutors accused McAfee of not filing tax returns from 2014 to 2018 even as he earned millions from “promoting cryptocurrencies, consulting work, speaking engagements and selling the rights to his life story for a documentary,” according to an indictment last June in a U.S. court in Tennessee, where he once lived.

Spanish court documents released last week alleged he owed the U.S. government more than $4.2 million in taxes. Separately, the U.S. Securities and Exchange Commission claimed McAfee promoted investments in initial coin offerings without disclosing he was paid more than $23 million to do so. The U.S. Department of Justice has a similar case against him.

According to the indictment, McAfee managed to avoid paying taxes by routing his payments through bank accounts and cryptocurrency accounts set up in other people’s names and hiding assets like real estate, a vehicle and a yacht also under the names of others.

Such a complex money trail could keep lawyers busy for years. “This will be a long burn,” said Gwynn Hopkins, a forensic accountant at Perun Consultants in Hong Kong.

But the fact that McAfee died before a verdict was reached in his case means any criminal case against him will be dropped, according to legal experts. And, most countries don’t enforce foreign judgments in relation to tax, Hopkins said. “The general position that’s established is that nation states don’t act as tax collectors for sister states unless there’s a treaty.”

‘Go After His Money’

Still, while McAfee’s death means he’ll never be convicted, the U.S. can continue its case by going “after his money, not his freedom,” according to federal defense attorney Nick Oberheiden.

The route to potentially recover any of McAfee’s property or assets will now be through suing his estate through a process known as civil forfeiture. The move is uncommon outside of the U.S., according to Evelyn Baltodano-Sheehan, a former prosecutor at the U.S. Attorney’s office in the Southern District of Florida, and currently a partner at law firm Kobre & Kim, in Miami. The Department of Justice has been seeking to export the idea to other jurisdictions precisely because of situations like McAfee’s, she said.

“For the most part, in a civil forfeiture case, the government would have to prove the same thing they have to in a criminal case, that someone committed an offense, that the property in question was either derived from or used to commit that offense,” Baltodano-Sheehan said. “A person contesting the forfeiture has the right to force the government to prove his case to a jury. There’s a lot of due process,” she said.

The civil forfeiture process is also an effective way of recouping funds in the form of cryptocurrency, she said. The U.S. government is working with a growing number of private partners to quickly map out where Bitcoin went and in what exchanges funds might be held.

“Their resources and their capabilities in the crypto space are increasingly better,” she said. “Just because it’s crypto doesn’t mean it’s gone and unrecoverable, there’s tons of options that you can have both on the criminal side as well as civil litigation, very fact-specific, very jurisdiction-specific, where, if it’s actually there, there is a good chance that you can get a court to freeze it.”

Before anything else can happen, however, there needs to be a death certificate or proof of death from Spanish authorities, according to legal experts, which hasn’t been produced yet. McAfee’s lawyer, Nishay Sanan, has said that until they receive the documents, nothing will move forward. Spanish authorities have said results of the official autopsy could take as long as several weeks. A preliminary autopsy showed he died by suicide, according to Spanish newspaper El Pais.

Meanwhile, McAfee’s wife and legal team will vigorously defend his estate. The cybersecurity pioneer had argued that the extradition request was politically motivated and therefore wasn’t appropriate. “We were actively working on Mr. McAfee’s case and were preparing to fight for his innocence before the United States courts,” Andrew Gordon, another of McAfee’s attorneys, told USA Today. “John was eager to share his side of the story.”

On Friday, McAfee’s wife demanded a “thorough investigation” of his death, and said that when she last spoke to him earlier in the day he was found dead, her husband didn’t sound like someone who was suicidal. The U.S. State Department said it’s “closely monitoring local authorities’ investigation into the cause of death,” according to the AP.

The U.S. government will now have to weigh the prospects of a lengthy and expensive legal battle with the possibility that there may not be much money left to recoup, if they can even find it. U.S. legal authorities will now likely subpoena information from those responsible for his estate.

Once worth more than $100 million, McAfee’s fortune was reduced to $4 million following a series of failed investments in real estate and stocks, the New York Times reported in 2009. McAfee, who resigned from the security software company he founded decades ago, was also notorious for his drug use, which he has spoken about publicly, and hiring of prostitutes. After losing his fortune in the stock market crash, McAfee moved to Belize. In 2012, local authorities accused him of assembling a private army and he was sought for questioning in connection with the murder of his neighbor Gregory V. Faull. He was never charged with a crime, but fled to Guatemala where he was detained and released before eventually returning to the U.S. McAfee said he was innocent.

McAfee’s case has some parallels with another high-profile fraud case where the defendant died. In 2001, Kenneth Lay, the former chief executive officer of Enron Corp., was charged with 10 counts of conspiracy, securities fraud and bank fraud that led to the second-largest bankruptcy in U.S. history at the time. He was convicted in May 2006 and died of a heart attack two months later.

A federal judge tossed out the original verdict on grounds that Lay hadn’t had a chance to appeal it before he died. The U.S. government filed a civil forfeiture action against Lay’s estate, seeking to strip it of $12.7 million in allegedly ill-gotten gains. In April 2013, the U.S. government settled with Lay’s estate and was awarded $2.7 million in cash after Lay’s widow was forced to sell the couple’s penthouse.