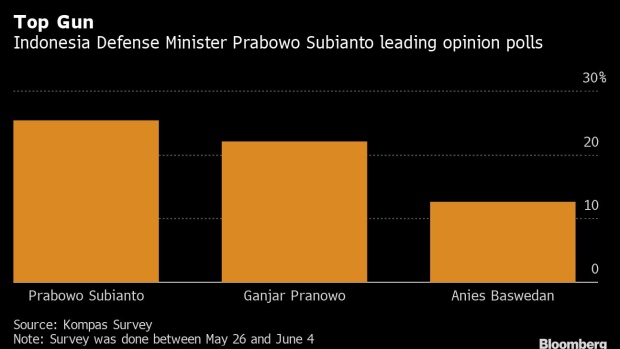 (Bloomberg) -- Indonesian Defense Minister Prabowo Subianto will run for the presidency in 2024, hoping the third time’s a charm as he tops popularity surveys on the back of his strongman image and support from the majority Muslim population.

Prabowo, who leads Indonesia’s third largest party Gerindra, announced his intention in a briefing after a party meeting on Friday.

The former special-forces commander announced his candidacy more than 18 months ahead of the elections to capitalize on popular support while he remains in President Joko Widodo’s government. The leader, popularly known as Jokowi and who beat Prabowo in the last two election contests, isn’t able to run again due to the two-term limits.

“I accept your call to be a candidate for the 2024 presidential election,” said Prabowo, who is among the top three leading candidates in a number of opinion polls.

According to a survey published in June by top newspaper Kompas, Prabowo is leading with 25.3%. Ganjar Pranowo, the current governor of Central Java, is close behind with 22%, while incumbent governor of Jakarta Anies Baswedan is ranked third with 12.6%.

Prabowo, who was once married to a daughter of former dictator Suharto, has consistently positioned himself as a strongman who can make Southeast Asia’s largest economy a major power to be reckoned with.

Yet he had struggled to defeat Jokowi in the last highly-charged presidential race that was marred by identity politics. Shortly after the tight 2019 presidential race in which Jokowi won 55.5% of the vote, Indonesia’s Constitutional Court dismissed Prabowo’s allegations of systemic electoral fraud.

Prabowo’s candidacy is likely to draw strong support from hardline Islamic groups and parties in some of the most conservative regions such as West Java, West Sumatra and Aceh. These regions shored up his votes in the last election contest.

“It’s wrong to think Indonesia could become Islamist should Prabowo come to power,” said Singapore-based Achmad Sukarsono, lead analyst for Indonesia at Control Risks. “He has to coalesce because he needs the votes. He will do a lot of things that would make him look like the symbol of Islamism.”

Investors will be watching to see if a new administration with different priorities could upend Jokowi’s vision of a new capital city powered by renewable energy that is set to complete by 2045.

Indonesia is looking to move its capital city from Jakarta to Borneo, which will be its biggest test to its economic superpower aspirations. The first phase of the $34 billion project is due to be completed by August 2024, in line with its 79th year of independence from Dutch colonial rule.

That isn’t necessarily a bad thing for businesses, some of which have complained Indonesia’s system is “too free” and that makes it harder to know who the real power brokers are, Sukarsono said.

Gerindra and Partai Kebangkitan Bangsa, one of the nation’s largest Muslim-based parties, declared a political alliance on Saturday, becoming the second such collaboration announced for the 2024 elections. The two groups agreed to let their respective chairmen pick candidates for president and vice president. They reiterated that the alliance was open to other parties.

“The coalition between Gerindra and PKB is based on a wish to join two powerful forces in Indonesia that is nationalism and religiosity to avoid polarization in the 2024 elections,” said Gerindra central executive board head Sufmi Dasco Ahmad.