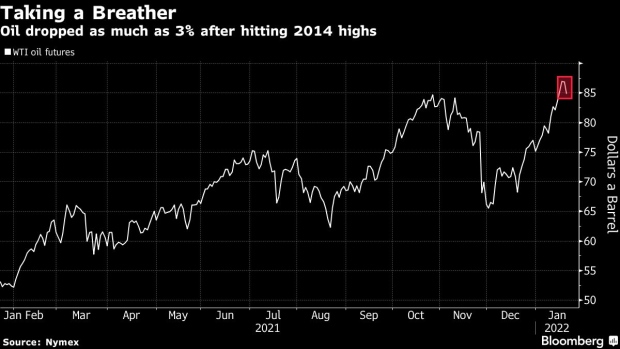 (Bloomberg) -- The price of oil hasn’t even reached $100 a barrel, but that’s not stopped economists at JPMorgan Chase & Co. from war-gaming what a surge to $150 -- this quarter -- would mean for the world economy.

In a report published Friday, economists including Joseph Lupton and Bruce Kasman warned that such a shock would be enough to reduce global growth by more than three quarters, to around 0.9% in the first half of the year -- versus the 4.1% they currently forecast.

Inflation at the worldwide level would also more than double, to 7.2% rather than the projected 3%, in the bank’s scenario. That could potentially force central banks to constrain monetary policy even faster than they now intend, the analysts said.

“Oil shocks have a long history of driving cyclical downturns,” they wrote. “The latest geopolitical tensions between Russia and Ukraine raise the risk of a material spike this quarter.”

JPMorgan noted the analysis does not allow for financial market fallout from a conflagration between Russia and Ukraine nor for the effects of U.S. sanctions being imposed on Russia.

After surging to its highest level since 2014 this week, oil retreated on Friday, with Brent crude at $87.62.