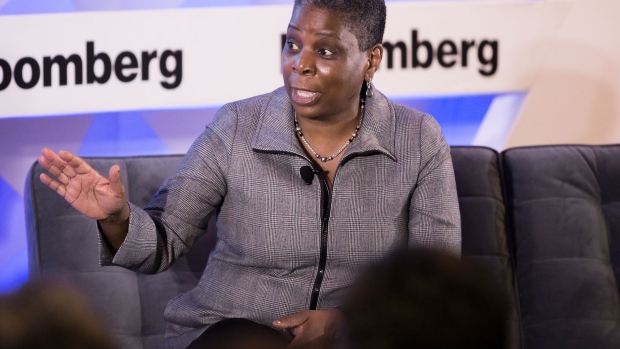 Retired astronaut Mae Jemison speaks during an unveiling event for the General Motors Co. (GM) 2020 Chevrolet Corvette Stingray sports car in Tustin, California, U.S., on Thursday, July 18, 2019. With the all-new Corvette, which GM's Chevrolet division showed off outside Los Angeles late Thursday, the sports car born in the 1950s is getting a radical makeover to shove it into the modern era. Photographer: Patrick T. Fallon/Bloomberg , Bloomberg

(Bloomberg) -- Few Black women have made it to the top. Only one has made it to a U.S. presidential ticket.

For other Black women who’ve made it to the highest levels of their fields, having Harris in the VP slot is more than historic. They say she’ll strengthen conversations about workplace diversity in the U.S. at a time when pay and race disparities are more important than ever before.

While Harris would break barriers if she’s elected, that won't fix a system where both women and Black people under-represented in leadership roles. But it will make it harder to ignore issues of race and class at a time when Covid-19 has made them more urgent.

“Kamala Harris is something you cry about,” said Ursula Burns, the first Black woman to serve as a chief executive officer of a Fortune 500 company. “In a good way, like Obama, or when your kid graduates from college.”

“We know already from education, business and politics that diversity of opinion and approach actually makes for better solutions,” said Burns, the former CEO of Xerox Holdings Corp. and Veon Ltd. “So I'm really excited that we have a skilled, experienced, outspoken and very smart person who is African American and a woman as Biden's running mate.”

For Mae Jemison, a former NASA astronaut who was the first Black woman in space, Harris’s appointment is important not because she will serve as a role model but because she will change perceptions. “When I was chosen for NASA and people were asking me about the effect on young Black girls, I said it was also important for the White male gatekeepers to see me,” she said.

For these women, Harris’s qualifications are just as important as her race. “Harris is good at what she does and it shows how the country has evolved that there was a range of skilled, experienced candidates who are also women of color for him to choose from," said Burns, who sits on the boards of Nestle SA, Uber Technologies Inc., and Exxon Mobil Corp.

Mary Winston, one of the few Black female CEOs of a major U.S. company when she ran Bed Bath & Beyond Inc. on an interim basis last year, called Harris “highly intelligent, pragmatic, capable of articulating her point, and translating that into action... She is tenacious, in terms of being passionate about a point and not being afraid to drive that point home even if there is opposition to it.” Boardroom diversity isn't the only cause Harris would be able to influence. The Black Lives Matter movement has cast doubt about how integrated the country is a whole, especially at a time when Covid-19 is peeling back a public health disparity for minorities.

She shouldn't be expected to solve the country's racial issues, Burns said, but her presence will change the conversation. “All the excuses you can make when you have a non-diverse team are harder to keep,” she said. “Your presence makes it necessary to have a more articulate discussion.”

Harris is not only intelligent, she brings a new point of view, and that's a main reason she would be an asset in the White House, Burns said. “When she walked down the street as a kid, she was treated differently than every vice president or president we've had so far.”

While Harris’s selection is historic, it's still an anomaly, said Winston, who is president of WinsCo Enterprises and serves on the boards of Chipotle Mexican Grill Inc. and Bed Bath & Beyond. “That is the case for so many of us who have been the first,” said Winston, “You have an added burden to succeed. If you don't you know there won't be another one like you for many years to come.”

Burns echoed that point. “We are making progress, but it’s slow, slow, slow,” Burns said. What makes a bigger difference for the future of diversity in the U.S. isn't a change in the race or gender of a leader, she said. It’s “the intolerance of society toward bias and racism and sexism. If we continue to play our hand with just 50% of the cards, we'll continue to lose.”